Nolan Smith is a rising American college football player. Smith played as a linebacker for his team and finished his collegiate career at the University of Georgia. Smith announced to go for his senior years in Georgia rather than entering the 2022 NFL Draft. Nolan Smith has been named in the CFP National Champion 2021, Anthony Munoz Award 2018, and two times Today High School All-US (2017, 2018).

Nolan Smith was born in early 2000. He has not disclosed a hint about his parents to the public, yet he grew up in Georgia. Nolan Smith stands 6 feet 3 inches tall (1.91m) and weighs over 107Kg (235lb). Smith majored in mathematics from his college.

Nolan Smith is yet to start his professional career, and as he played for college teams, players do not make a penny while representing their universities in the respective sports as a rule made by the NCAA. At the same time, the athletes can earn well with sponsorships, endorsements, and merchandise. He is representing his college teams for his senior years rather than entering the 2022 NFL Draft; he is not expected to have some large net worth. As of 2022, his net worth remains under review.

Apart from his college career, Smith makes good earnings through partnerships and sponsorships. He has been seen promoting Krystal's food and beverages through his Instagram. Smith is happy with his partnerships and is looking for upcoming years of surprises. He, too, has been promoting Kendra Scott's fashion and lifestyle through which he might make some good earnings.

Apart from being a professional football player, Smith has been dating his college girlfriend, Aubrey Deitch. The couple has been dating for years, as seen from his Instagram.

Smith's Instagram has been filled with all professional and private life; Smith and Aubrey are often seen together spending quality time with each other on a football ground. She has been his prime supporter from his early years in football. 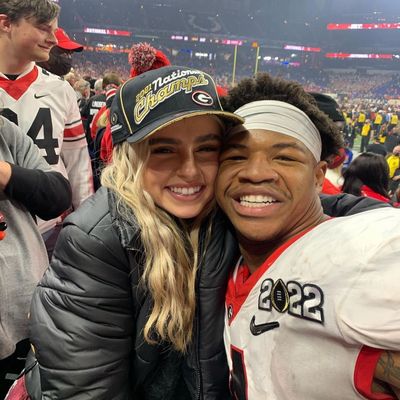 Nolan Smith's girlfriend also attends the University of Georgia, and the couple is often seen together in their college.

Georgia Bulldogs' linebacker Smith is quite popular on Instagram; 40.1K followers have followed him as of the date. Smith posts about his professional life and private life on his Instagram; his Instagram goes by n0lan. Smith.