Some people come to the limelight after a year of hard work and success, and some rise to fame after having a relationship with a reputed personality. Nikki Sapp was a  member of the NBA's Miami Heat's Dance Squad. Sapp is better known as the wife of a famous  American professional basketball coach who is the head coach for the Miami Heat of the National Basketball Association, Erik Jon Celino Spoelstra.

Niki Sapp was born on March 22, 1987, in Florida. Sapp rose to fame only after her career so, much information about her early life and her parents is under the radar. After graduating from High School, Nikki enrolled at Miami International University of Art & Design, graduating with a degree in fashion design while on a full scholarship. Nikki was part of the Miami Heat's Dance Squad while attending her University.

Nikki is married to her longtime boyfriend, Erik Spoelstra. The love birds had been dating for some time before tying their wedding knot. Nikki and Erik walked down their wedding aisle on July 22, 2016, in a private wedding ceremony. The duo announced their engagement on September 17, 2015.  Despite the 18-year age gap between the couple, they have managed to build a happy home. 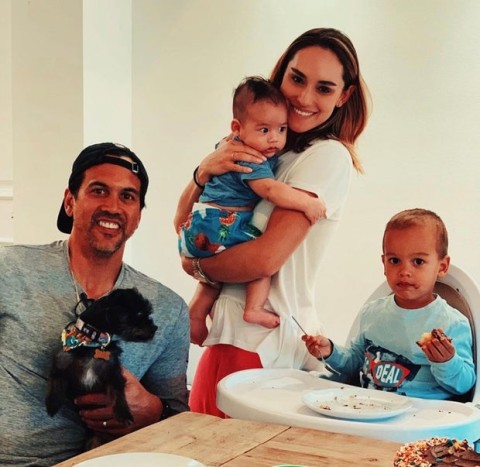 CAPTION: Nikki along with her children and her husband SOURCE: [email protected]

Nikki and Erik opened about expecting their first child in April 2018. In March 2018, the couple welcomed their first child together, son Santiago Ray Spoelstra. The notoriously private couple did not reveal their son's name until three days after he was born. In December 2019, The duo their second son, Dante Nicholas Spoelstra. Spoelstra's kids are still very young, but he tries to play an active role in their upbringing, despite the enormous demands of being in charge of one of the top NBA franchises.

Both of them are active social media users and keep sharing many pictures of the couple and their children regularly. The family of four is living a happy married life.

Nikki is living a lavish life through her husband's successful career in NBA. In 2016,  Spoelstra swapped his bachelor pad for a luxurious South Florida estate, which cost a whopping $2.6 million. Her husband, Erik, has an estimated net worth of more than $10 Million. He has been earning a hefty sum throughout his career. Erik has a salary of $3 Million working as the head coach of the Miami Heat.

Nikki started working as a dancer for the Miami Heat' Dance Squad. She worked as a dancer from 2005 until 2008. She has served as a director for the Guy Hepner Contemporary Art Gallery in West Hollywood, California.