Nikita Zaitsev is a Russian professional Ice-hockey player who plays in the National Hockey League (NHL). As of 2019, Nikita Zaitsev currently plays for the Toronto Maple Leafs as their defenceman.

Nikita Zaitsev reportedly earns around $4,500,000 as his yearly salary from Toronto Maple Leafs. He has an estimated net worth of over $2.5 million as of 2019. Zaitsev is married to his wife Margo Gotovtseva and has 2 children with her.

Nikita Zaitsev Net Worth and Salary

As per his relationship status, he is a married man and currently living with his beautiful wife Margo Gotovtseva. 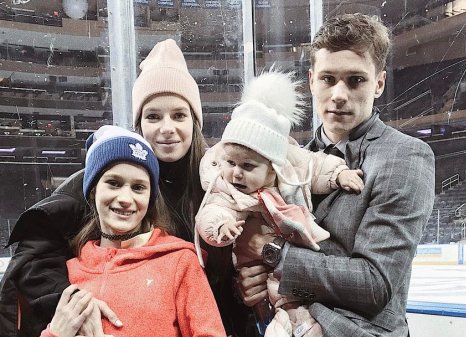 CAPTION: Nikita Zaitsev with his wife and children. SOURCE: Twitter

Further, the spouse is a parent of two daughters, Vera and Sonia. Their first child Sonia was born in Russia and their 2nd child Vera was born in Canada.

The couple is living a happy life with no any rumor of separation or divorce in recent time. Talking about his body measurement, the Famous NHL star is 6 ft 2 in (188 cm) in height and weighs around 88 kg.

Also Read: 30 Years Ice Hockey Player Phil Kessel Dating Anyone as Girlfriend or He Is Married?

Nikita Zaitsev was born on 29 October 1991, in Moscow, Russia and was raised by a single parent Igor Zaitsev (father). As per his family background, he is Russian. Further, his star sign is Scorpio.

Zaitsev signed a one- year entry-level contract with the Maple Leafs on 2 May 2016. He made his preseason debut with the club on 2 October, scoring a goal in a 3-2 win against Montreal Canadiens.

Zaitsev signed a seven-year contract extension of $ 31.5 million on 2 May 2017 with an average annual salary of $4.5 million.