Gossip Nike suspends relationship with Kyrie Irving. Know About The Contract Details, His Net Worth and Houses

Nike suspends relationship with Kyrie Irving. Know About The Contract Details, His Net Worth and Houses

In an age where a person can share their beliefs with just a click of a button, where do we draw the line between freedom of speech and spreading false information? As the world has become much more connected over the years via social media, the public pays close attention to every post of any famous individual. And Kyrie Irving recently came under fire for his anti-semitic comments. So his relationship with Nike, the Brooklyn Nets, and many of his fellow athletes began to go south.

Fans were shocked when Kyrie tweeted his support for the controversial movie in 2021. Throughout his career, Irving did many amazing things on the court. However, all of his achievements became null thanks to his insensitive comments. Despite all the backlash of his tweets and comments over the antisemitic topics, many remain bewildered about his firm belief and support of what he said.

Kyrie Irving lost his sponsorship with Nike and was suspended from the Brooklyn Nets!

Men should have the right to speak freely but never be allowed to spread false information. And when Kyrie Irving showed support for the highly antisemitic movie, the general public became outraged. Not only did his tweet cost Kyrie his sponsorship with Nike, but he was also suspended from the Brooklyn Nets. In this age of cancel culture, celebrities walk on eggshells and watch what they do and say, but Irving shocked the world with his frank point of view. Yes, his opinion isn't ethically correct, but Kyrie's honesty is something many found exceptional. The basketball star blatantly stating that the Black community is the Jews left a bad taste in many. Millions were exposed to the idea of Black Hebrew Israelites from his platform.

The film that promotes Black Hebrew Israelites denies the Holocaust ever happening. And that didn't bode well with the fans and Kyrie's fellow athletes. And as such, Irving lost his sponsorship with Nike and was suspended from Brooklyn Nets without pay.

Although the fire raged on, Kyrie stayed firm in his belief. And his refusal to back down from his opinion resulted in his suspension from the NBA team. It wasn't that Irving didn't get a chance to disavow antisemitism comments. No, he remained adamant about remaining firm in his ideology. And as such, both Nike and Brooklyn Nets raised their hands and resorted to Kyrie's suspension.

Before he was suspended, Kyrie Irving held a lucrative deal with the Brooklyn Nets!

Kyrie Irving was earning a massive amount of money in 2021. And his team at the time paid Irving 33.33 million USD a year. Making millions a year, Kyrie accumulated an estimated $115.6 million as his net worth. Throughout his career, Kyrie was part of many NBA teams. And Irving joined the professional basketball scene in early 2011. Similarly, the talented basketball player started his journey with the Cleveland Cavaliers. And by 2014, the Cavaliers offered the talented athlete a $90 million contract extension.

After staying with the Cleveland Cavaliers for half a decade, Kyrie joined Boston Celtics in 2017. And unlike his previous team, Ivring's deal with the Celtics remains hidden from his fans. But it's without a doubt the NBA team from Boston paid him millions.

And finally, Irving played for the Celtics in 2017 and left the team in 2019. Similarly, he went on the be a part of the Brooklyn Nets. And the Nets offered Kyrie a salary of $31 million at the start. His yearly income caps at $36 million in his final year in Brooklyn's NBA team.

Kyrie bought a mansion for $3.7 million!

Kyrie's current team suspended him, and news/rumors about Irving leaving the Nets surfaced. Not only that, but his recent purchase of a mansion in LA further added fuel to the story. By July 2022, Irving bought a $3.7 million estate in Los Angeles. 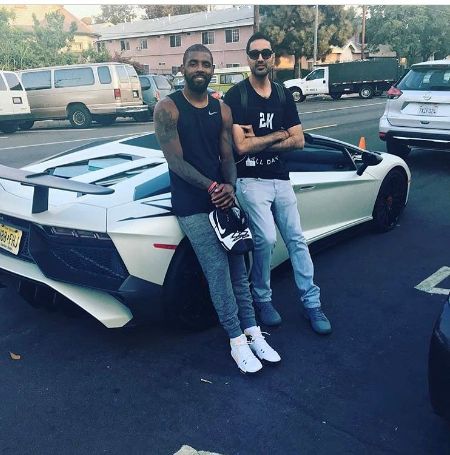 Kyrie Irving and Ronnie Singh are sitting on the side of a luxury car. SOURCE: [email protected]

Aside from a mansion worth multi-millions, Kyrie also owns multiple luxury cars. Currently, the millionaire basketball player Irving drives two Lamborghinis: The Aventador and The Aventador SV Roadster. Both models of Lamborghinis cost over $500k and $699k, respectively.

Irving was earning millions from his deal with Nike!

Before Nike dropped him for his antisemitic views, Kyrie Irving earned $17 million. However, he refused to disavow antisemitism tweets and comments he made. And so, the downfall of Irving in a commercial sense started. Not only did his team suspend him for five matches without pay. Kyrie Irving recently bought a mansion in LA, fueling the rumors of him leaving the Brooklyn Nets in 2023. SOURCE: [email protected]

After his scandalous tweet, following the rabbit hole, Kyrie stated he wasn't being antisemitic if he knew where he comes from. His question when Irving said this was, did he have antisemitic beliefs. And when he avoided answering with a simple yes or a no, both Brooklyn Nets, and Nike placed their suspension.