Nick Burdi is an American professional Baseball player who plays in the Major League Baseball (MLB). As of 2019, Nick Burdi currently plays for the Pittsburgh Pirates as their pitcher.

As a pitcher, Nick Burdi reportedly earns around $575,000 as his yearly salary from Pittsburgh Pirates. Further, Nick Burdi has an estimated net worth of over $1 million. As per his marital status, he is married to his long term girlfriend Rebecca Burdi.

Nick Burdi was born on January 19, 1993, in Hinsdale, Illinois to parents Bob and Debbie Burdi. As per his nationality, he is American and belongs to the White ethnic group. Further, his star sign is Capricorn. He grew up along with his siblings, Drew and Zack.

Nick Burdi Net Worth And Salary

As of 2019, Nick Burdi has an estimated net worth of over $1 million which is quite similar to Stephen Tarpley. He reportedly signed a contract with Pittsburgh Pirates in 2017. Further, the MLB player has an average salary of $575,000 annually, similar to Chad Kuhl. Nick Burdi so far has made earnings of $1,763,800 from his entire MLB career.

In addition,  Philadelphia Phillies selected Burdi in the Rule 5 draft and traded him to the Pittsburgh Pirates for $500,000 of international signing bonus money in 2017.

Exploring his personal life, he is a married man. He tied a knot with his long term girlfriend Rebecca Burdi on December 15, 2018.

Additionally, Nick posted about his wedding in his Instagram account with the caption of " To everyone that made our dream day come true we can't thank you guys enough!! It was the day Rebecca Burdi dreamed of since she was a little girl. December 15, 2018, will always hold a special place in our hearts."

To everyone that made our dream day come true we can't thank you guys enough!! It was the day @rebeccaburdi dreamed of since she was a little girl. December 15, 2018 will always hold a special place in our hearts. Thank you to everyone who made this possible! We love all of you!!!

So this concludes that the couple is happy with the relationship and living a smooth life with no rumors of divorce or separation in recent time. 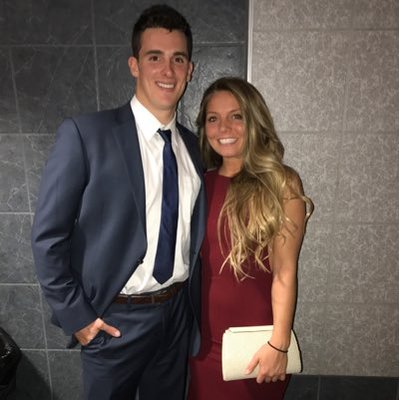 Talking about body measurement, the Famous MLB star is 6 feet 4 inches in height and weighs around 99.8 kg.

In the 2014 MLB draft, Burdi was regarded as a top prospect. In the second round, the Minnesota Twins selected Burdi with the 46th overall draft selection. In 13 innings he posted a 4.15 ERA, and in August the Twins promoted him to the Class A- Advanced Florida State League's Fort Myers Miracle.

Due to a bone bruise in his right elbow, Burdi pitched just three innings in 2016. Later, Burdi started with Chattanooga in the 2017 season. The Philadelphia Phillies selected Burdi in the draft Rule 5 after the season and traded him for $500,000 international signing bonus money to the Pittsburgh Pirates.

Further, his name appears along with his star team-mates such as Chris Archer, Francisco Cervelli and many more.