Nathan MacKinnon is a Canadian professional Ice-hockey player who currently plays as a center as well as an alternate captain for Colorado Avalanche of the National Hockey League (NHL). Additionally, he was first drafted by the Avalanche in the 2013 NHL Entry Draft.

The 2015 Men's World Ice Hockey Championships gold medalist, Nathan MacKinnon is reported to be in a romantic relationship with her girlfriend, Charlotte Walker. Moreover, he has collected a net worth over $15 million which is solely dependent upon his professional career.

Is Nathan MacKinnon Dating Anyone? Know His Personal Life

The Ice-hockey star, Nathan is reported to be in a romantic relationship with his girlfriend, Charlotte Walker. Apart from the pictorial evidence, the details about how and when they started dating are still out of reach of media. 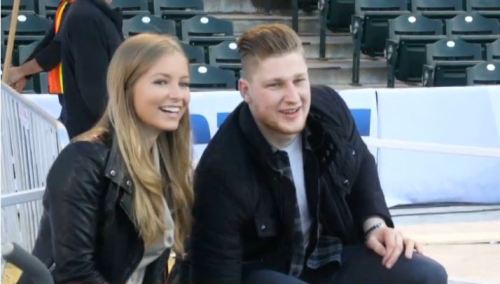 Nathan with his girlfriend SOURCE: Tumblr

Moreover, the couple seems to be enjoying each other company as they are regularly spotted together in public, attending events and spending quality time. Importantly, Charlotte doesn't miss a single match of Nathan which suggests that the couple is in deep love and acting as a motivating factor for each other.

Additionally, he was also rumored to be in a relationship with the famous Canadian actress Vanessa Morgan. The duo was reported to dating around 2015-2016. The news about Vanessa and Nathan aired in the media when Vanessa wished birthday to Nathan on her social account with a caption "Happy birthday to my best boyfriend ever." 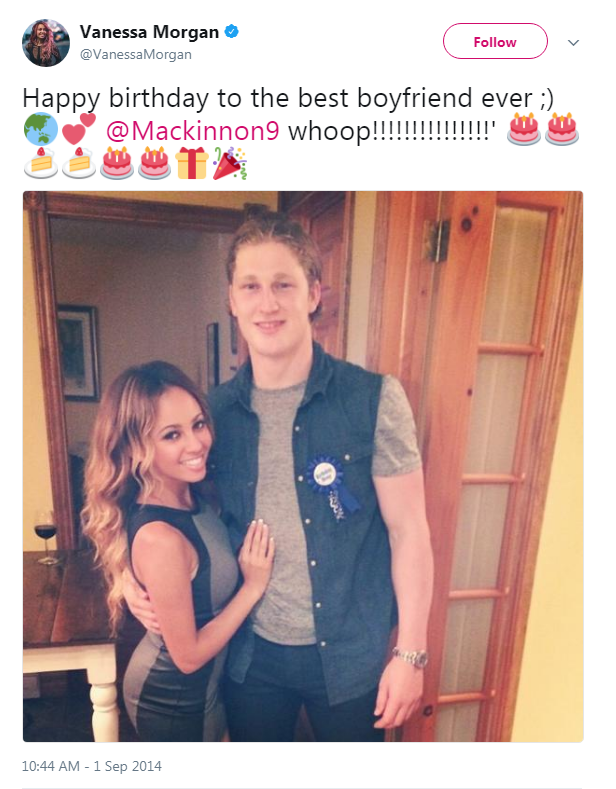 Despite sharing a good bond with each other the duo couldn't take their relationship to the next level and as of now his ex-girlfriend Vanessa is engaged with Michael Kopech who is also an Ice-hockey player.

Nathan MacKinnon Earnings; How Much Is His Net Worth?

Nathan who has been playing Ice-hockey since long as accumulated a massive net worth from his professional career. Reportedly, he holds an estimated net worth over $15 million and earns $6,300,000 as a salary form Colorado Avalanche. As per his recent contract with Colorado Avalanche, he signed a 7 year / $44,100,000 contract, including $44,100,000 guaranteed on July 8, 2016.

Moreover, the famous NHL star is often spotted enjoying his vacation in a luxurious way which clearly suggests that he has collected an enormous fortune from his professioanl career.

Also, Nathan earns an additional amount of money via different endorsement deals, sponsorship, and commercials, adding a significant amount of money to his current salary which will certainly increase his net worth in coming days. In addition, he has never revealed his valuable assets including cars and house but the player with such a huge salary is obvious to have an expensive car and luxurious house.

Nathan was born on September 1, 1995, in Springhill, Nova Scotia, Canada to Graham Mackinnon and Kathy Mackinnon. He is a Canadian native and belongs to the White racial group. Also, he was born under the zodiac sign Virgo.

Being an avid athlete, Nathan grew up playing in the minor ice hockey system of Cole Harbour, Nova Scotia. Additionally, he attended Shattuck-Saint Mary's where his professional playing career began. In 2011, he was considered as one of the hot prospects in Quebec Major Junior Hockey League (QMJHL) Draft and was eventually selected by Baie-Comeau Drakkar in the first round.

Nathan was first drafted by the Avalanche in the 2013 NHL Entry Draft. He signed his first professional contract with the team on July 9, 2013, and made his debut for Avalanche on October 2, 2013. Additionally, Nathan became the youngest player ever to represent Avalance in senior level.

MacKinnon scored his first goal of the NHL on October 12, 2013, at the Verizon Center against Michal Neuvirth of the Washington Capitals. One of his notable achievements of  MacKinnon was he compiled a 13-game point streak from January 25 to March 6, surpassing Wayne Gretzky to have the longest scoring streak by an 18-year-old in NHL history.

Also, he has represented the national team of Canada and has won the gold medal in 2015 and silver medal in 2017 in Russia and Germany/France respectively.