How Much Is Montserrat Ruiz's Net Worth In 2021?

With a professional record of 9-1-0, Montserrat has earned a good deal of money through her MMA career. She is believed to make no less than the four-digit figure per fight. According to the source, the average annual income of $68,000.

In 2021, she was signed to the Ultimate Fighting Championship where the fighter has a guaranteed amount no matter they win or lose. Further, there is a win reward, the fight of the night, and Performance of the Night bonuses.

Outside the ring, the MMA fighter makes a tremendous sum through sponsorship and endorsements. However, in Ruiz's case: she's not seen promoting any brands. As of 2021, her net worth is approximately $0.1 million.

On 30th March 2014, Montserrat made her professional MMA debut at GC- Gladiators Coliseu 10, where she defeated Lucy Moreno Murillo via a split decision. She next faced Annely Jimenez Garcia at XK 25 - Xtreme Kombat 25 on 30th August 2014. She won the bout via unanimous decision. That season's last fight was against Paulette Rayes Hernandez which was a TJO win. The following she has two fights against Diana Reyes and Pamela Gonzalez, winning both fights via TKO and Submission respectively. On 11th June 2016, she defetaed Jazmin Gonzalez at MCF - Battle on the Neach via TKO.

In 2018 she moved to the United State and joined Invicta FC where she had her career's first loss against Danielle Taylor in the event Frey vs. Grusander 2 on 15th December. Rebounding from loss, she made her come back at Invicta FC 41 - Morandin vs. Ruiz, defeating Janaise Morndin via submission in round one.

Ruiz is scheduled to make her UFC debut against Cheyanne Buys on 20th March 2021.

The personal life of Montserrat Ruiz is yet to come out. There is less to no information about her love, not even her relationship status. Additionally, her Instagram where she has 29.3k followers does not feature any of her lovey-dobby pictures. Since there is no confirmed info, the MMA fighter is believed to be single. 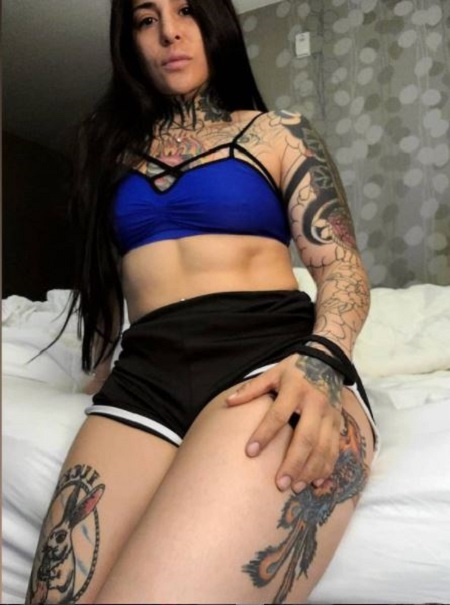 Besides, Ruiz is passionate about tattoos and has inked several parts of her body: neck, shoulder, chest, hip, and thigh.