Notably, with the Tunisia National football team, he has capped the 2022 Kirin Cup and the 2021 FIFA Arab Cup silver medal. Es Tunis, Caykur Rizespor, Benevento, and Rubin Kazan are his former clubs with whom he played professional football in the time from 2021 and 2022.

The self-center personality athlete Montassar Talbi has kept his love very confidential. He prefers to keep it secret now as he might not be comfortable enough to share it with the public. Due to his low-key life, most people are unfamiliar with his love affairs. On top of that, there is no record of him being in any relationship. So, he is assumed to be single at the moment.

Who are Montasaar's Parents? Private Details

Montasaar Talbi was born under the family name Montassar Omar Talbi on May 26, 1998, in Paris, France. His age is now 25 years old. The right-footed player holds the mixed nationality of France and Tunisia. Despite being of Tunisia origin, Talbi spent his youth age in his birth nation, i.e., France only. Talking about his hobby, he loves spending leisure time at the beaches. Also, he is a pet lover. All of his family are devout Muslims. 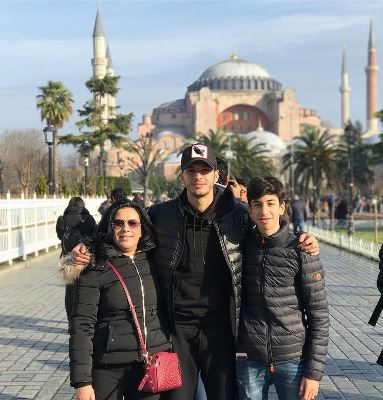 Quality time with his mother and brother  SOURCE: Instagram

Digging about his family matter, Talbi might have been raised by a single mother. Alongside him, he has a younger brother named Adam Talbi. Eyeing his post on online media, absentee posts, or details about his father are quite questionable. As soon as it's available, we will update you.

2022 Kirin Cup Champion Montassar Talbi is one of the rising soccer players. With his impressive skills, talent, and consistent performance, he has spotted a safe place on the team. Playing for Lorient FC, the Tunisia international makes a weekly salary of £8,900 and a yearly of £4,62,800. With that fantastic pay, he is one of the top four highly-paid athletes in Lorient FC. for your information, Terem Moffi tops the number one spot with annual earnings of £6,76,000.

His estimated net worth at the moment is $1.5 Million. Sporting brand Adidas is his endorsement brand which facilitates him with good financial incentives and high-quality soccer equipment.

Will Montassar Play in the upcoming 2022 FIFA World Cup?

Tunisia has not shared the 26 Men's Shortlist for the upcoming 2022 FIFA World Cup. Looking into his stats and performance, It seems like the player will be representing the Tunisia National Team.