Mo Martin is a well-known professional American golf player. She is currently playing in the LPGA Tour. Mo turned professional in 2005. Martin started her professional career playing at Futures Tour. Mo has already won four major professional titles to her name, including one LPGA tour and three Symetra tours.

Mo Martin was born Melissa Linda "Mo" Martin on October 8, 1982, in Pasadena, California. She is the daughter of Allen Martin and his wife, Linda Martin. Her father was a defense attorney and taught her to play golf as a child. Mo's father passed away when she was twenty years old. After graduating from High School, Martin enrolled at the University of California Los Angeles. Mo stands five feet and one inch tall and weighs 52 kg.

Mo has an estimated net worth of more than $3 Million. Mo is playing at the professional level for more than fifteen years. She is one of the longest-playing female golf players. Mo has earned much of her net worth through her LPGA events and Symetra Tour. 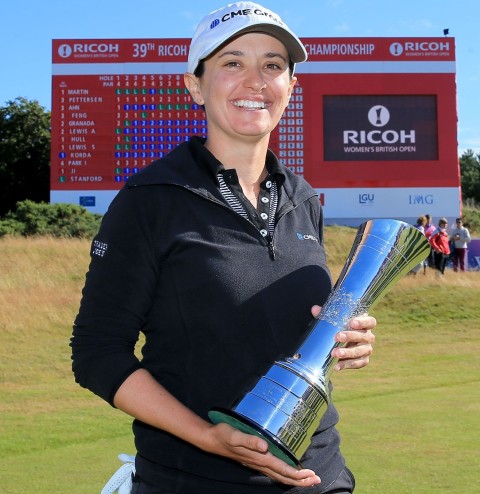 Mo shares a photo with her only LPGA title SOURCE: Getty Images

Martin took home $171,345 in her first year at the LPGA tours of 2012. She played in twenty-one events and made cuts in sixteen of them. The following season, Mo earned $319,244 while appearing in twenty-five games and making cuts in twenty-one. In the 2014 season, The American golf player made $680,624 from twenty-five events and became Rolex First-Time winner with her victory at the RICOH Women's British Open.

In the 2015 season, Mo earned $339,205 from twenty-eight LPGA events. The following season, Martin made $732,914 and crossed the $2 million mark in career earnings. Her earnings of the season remain the highest in a single season to date. Martin earned almost a million in the next two seasons and crossed her $3 million marks in career earnings. In 2019, Mo appeared in just seven events and made cuts in five games earned  $53,739.

Mo is very much private about her love life and her relationship status. She has not shared a word about her boyfriend in public. Martin belongs to the LGBTQ community. She is dating her long-time partner, Jennifer. The love birds have been together for more than two years. Martin about her sexual orientation through a post on her Twitter account in 2019.

Mo started playing golf from a very early age with her father. She played golf for the University of California Los Angeles. Martin turned professional right after graduating from University. The American golf player won her first professional title in 2007 at the El Paso Golf Classic. The following season, She won USI Championship.

Mo made her LPGA debut in 2012. She won her maiden LPGA title in 2014 at the Women's British Open. In 2018, Martin finished as a runner-up in the Evian Championship.