Mike Rodreguez is an American professional MMA fighter who is currently signed to the Ultimate Fighting Championship (UFC) under the Light heavyweight division. A professional since 2014, he previously competed ECS MMA and Cage Titan. To date, he has compiled a record of 10-4-1 (win-loss-draw).

Dorchester, Boston native, Mike Rodriguez was born on 28th November 1988, under the star sign Sagittarius. The thirty-one years old holds an American nationality and is of Afro-American ethnic background. REgarding his physique, he stands 6 ft 3 in (1.91 m) and weighs 205.2 lb (93.1 kg; 14.66 st).

How Much Is Mike Rodriguez Net Worth In 2020?

Mike Rodriguez's net worth as of 2020 is $0.5 million. The significant source of his income is his MMA career. Presently, he is signed to the UFC, where the fighter has a base salary (cash to show) no matter they win or lose. Furthermore, there is a win cash fight of the night bonus and fight week incentive pay.

Besides, he is sponsored by various brands Kill Cliff, Collector Cup, and Bio CBD.

Fighting out of Boston, Massachusetts, Mike is a married man. He tied the knot with his girlfriend, Cyndra with who he shares two children. Speaking of family, he told, “My wife and son mean the world to me, I love spending time at home with my son and I fight to give them a chance at a better life.” 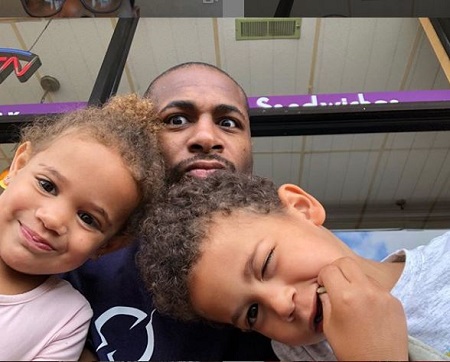 A matter of fact, Mike has not shared even single pictures with his wife but often post pictures of their two children on his official socials. It seems like, Cyndra prefers a low key personal life.

On 7th April 2018, Rodriguez made his UFC career debut against Devin Clark at UFC 223. He lost the bout via unanimous decision. He next faced Adam Milstead at UFC on Fox Lee Vs, Iaquinta 2 on 15th December 2018. He won the fight in round one via TKO.

On 13th July 2013, he faced John Allan at UFC Fight Night: de Randamie vs. Ladd. Originally, he lost the fight via unanimous decision but after Allan was tested positive for banned hormone and metabolic modulator tamoxifen the decision was overruled to a no contest. On 21st December 2019, he lost to Da Un Jung on 21st December 2019 at UFC on ESPN+ 23.