Mike Balado is a rising American college basketball head coach. Since 2017, he has been working as the head coach of the Arkansas State University. Balado started working as an assistant coach in 1999 and got his breakthrough with Arkansas as head coach. Last season, his team finished fourth in the West Big Conference.

Mike Balado was born on November 12, 1975, in Miami, Florida. He came to the limelight only after his successful career so, there is not much information about his early life with the media. After graduating from Columbus High School, Mike enrolled at St. Thomas University and graduated with a bachelor's degree in Sociology.

Know About Mike Balado's Salary, Net Worth, and Earnings In 2021

Mike Balado has an estimated net worth of more than $1 Million. He is among the youngest head coaches currently working in the Sun Belt Conference. Balado shall be earning millions in his upcoming days. Mike has an annual salary of $375,000. His contracts include several bonus amounts if his team reaches certain game semifinal and finals.

Mike worked with Louiseville as their assistant coach for four seasons. He was the third-highest-paid men’s assistant coach in the ACC. In his final season as an assistant at Louisville, Balado’s total compensation was $386,250. In 2013, Mike joined the team with an annual salary of $80,000.

Father of Twins; Who is his Wife?

Yes, You read that right. Mike is the proud father of twin children. Balado tied his wedding knot with Alicia Nigro in the late 2000s. The love birds had a private wedding ceremony where they invited only a few members from both the families and their close friends. As per sources, The pair had been seeing each other for some time before their marriage. 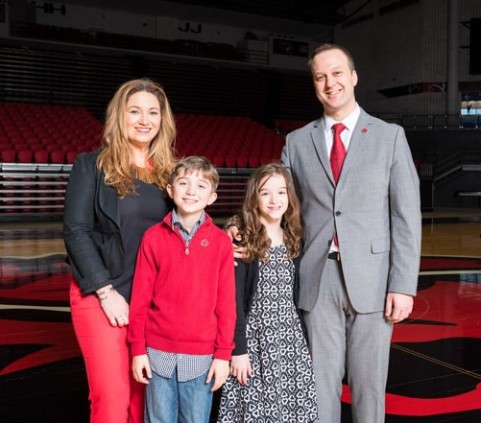 Mike with his wife and their children SOURCE: Astatehoops

Balado and his wife Alicia welcomed twins Aiden and Addy in June 2009. Mike and Alicia are active Twitter users. They keep sharing each other and their children's photos in their timeline regularly. As the head coach remains out of the house most of the time, Alicia remains at home taking care of their children. Mike keeps taking his wife and his children to his games regularly.

Mike started his coaching career in 1998, spending one year each as GA and assistant coach at D-II Augusta State. He a two-year starter and captain at NAIA St. Thomas in his hometown of Miami, Florida. In 2000, Southridge High School hired him as their assistant coach. He worked with th team until 2003 and moved to Nove Southeastern.

In between 2005 until 2017, Mike worked with several universities like Miami Dade, Florida Atlantic, Louisville before starting his work as Arkansas State's head coach. In his first year with the team, Balado's team ranked 11th in the Sun Belt Conference. In the following year, He has led his team in successful events. Last season, Mike's team ranked at No.4 at the end of the season.