Miguel Layun was born Miguel Arturo Layun Prado on June 25, 1988, in Cardoba, Vaeracruz. He is the son of Maribel Prado and Miguel Layun. Layun has not shared much about his early days. Miguel stands five feet and eleven inches tall and weighs 68 kg.

Miguel Layun has an estimated net worth of more than $5 Million. He has earned most of his net worth through his successful football career. Football players can make a handsome amount from their sponsorship and advertising deals. Miguel has an annual salary of £520,000 and a weekly wage of £10,000. Miguel is a married man living a happy married life and his wife and children. Layun exchanged their wedding vows with his longtime girlfriend, Ana Laura Galvan, in 2012. The duo had been dating each other for several years before their wedding. 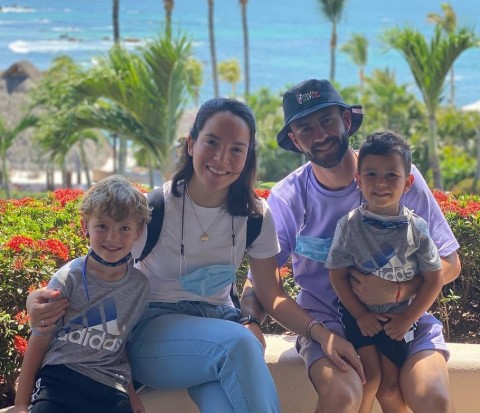 Miguel shares a photo with his wife and children SOURCE: [email protected]_layun

Miguel and Ana are the proud parents of two children, Marcelo and Mateo. The family of four is living a beautiful life.

Miguel started training with the youth club of Queretaro in 2003. The player appeared in numerous divisions for the club and made his professional debut with Veracruz in 2006. Layun remained with the club in 2009 and then transferred to Atalanta for €625,000. However, Miguel appeared in just two games and then moved to America.

In 2018, Layun moved to Sevilla on a loan season and appeared in sixteen events. Miguel then moved to Villareal for a season on a three-year deal. However, The player moved to Monterrey for two seasons. After spending two seasons with the club and appearing in seventy-three games and scoring three goals, Miguel moved o America on one year deal, with the option of an additional year, on a free transfer from Monterrey.

Miguel has been part of the numerous divisions for Mexico. He started his career with Mexico senior team in 2013. Until 2022, Layun has appeared in seventy-two games and scored six goals.