Michele Steele is a Chicago based correspondent for ESPN. She is one of the most versatile journalists in ESPN and has covered some of the biggest stories in the Midwest region and even has covered some national news for several programs like SportsCenter, NFL Live, Outside the Lines and ESPN's website and other digital platforms.

Michele Steele as a television anchor for ESPN is famous for her on and off-field interview skills after she interviewed NCAA president Mark Emmert.

Michele Steele Net Worth and Salary

As of 2018, ESPN's reporter is reported to receive a salary of around $35,000, and her net worth is over a million dollars. She is a successful 40 years old ESPN reporter who is enjoying a good exposure in the field of sports journalism. 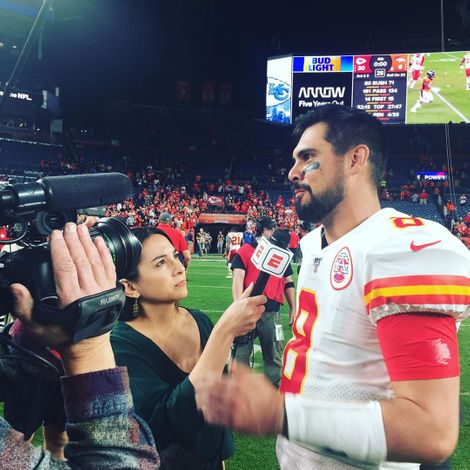 She is reporting for three different shows and is even a web journalist for ESPN and regularly appears in ESPN's various radio shows which further add up to her regular income. She is surely a hard-working lady and deserves everything from fame to money that she has now.

Michele Steele is a philanthropist. She is an avid supporter of the Michael J. Fox Foundation. Moreover, she was also associated with some other charitable organizations in the United States of America.

As per Michele Steele, she is a fun-loving woman and loves her life. She enjoys Illini basketball. Her favorite food is hot dogs and Chicken Pizza.

She was born on October 2, 1978, and is currently 40 years old. As for her ethnicity and nationality, she is a white American Sportscaster for ESPN. Further, the Sportscenter host's star sign is Libra.

From an early age, Michele Steele showed a huge interest in journalism. After high school, she attended the University of Illinois, where she received a degree in Economics. Later, she enrolled at Columbia University and earned a master’s degree in Journalism which seems to have paid her off pretty well.

Before being a professional media personality, she spent two years at Loire Valley France. She also participated in the New York Marathon in 2007. Before working with ESPN, Michele Steele served as a senior reporter for Forbes video-on-demand service and as a regular contributor to Forbes on Fox.

Before moving to Chicago she was ESPN’s Boston-based bureau reporter for three years. While at  Boston she reported NFL player Aaron Hernandez's trials, Death of boxing legend Muhammad Ali and many other events.

Michele Steele also worked at Bloomberg Television as the channel's only sports reporter. While working with Bloomberg, she interviewed several prominent sports figures that include Mark Emmert, NBA commissioner David Stern, Commissioner Roger Goodell, and many other celebs.

She was the first reporter to cover Steelers' star Ryan Shazier's injury's news. She has sat down with several football celebrities like Cowboys' owner Jerry Jones, Andy Dalton and has interviewed players like Drew Brees, Derek Carr, Le’Veon Bell and many other on the field in 2017's NFL season.

Michele Steele is hugely respected for her outstanding contribution to the world of media. She is also admired for her hot looks and beautiful pictures. She is available on social networking sites. She always has seen updating her post and pictures on social accounts.