Polish mixed martial artist, Michal Oleksiejczuk is currently signed to the UFC's Light heavyweight division. A professional since 2014, he has previously competed for FEN, EN, Wenglorz Fight Cup, and was the former Thunderstrike Fight League Light heavyweight champion in Poland.

A native of Leczna, Poland, Oleksiejczuk was born on February 22, 1995. Further, he holds a Polish nationality.

The Polish 205-pounder is currently signed to UFC which is considered his major source of earning. He took home $26,500 from his UFC debut fight at UFC 219. Further, he summoned a lucrative amount of $23,500 plus $50,000 Performance of the Night bonus from UFC Fight Night: Blachowicz vs. Santos. Similarly, he pocketed $27,500 at UFC Fight Night: Overeem vs. Oleinik.

Overall his UFC fight career earning till date is reported $127,500. Besides, previously competed for various fighting events, he has earned a decent sum.

With an adequate earning from his MMA career, Oleksiejczuk's net worth is $0.3 million as of 2019. Apart from his earning from MMA, he adds good worth to his bank account through his sponsorship deal. He is often seen on the commercial of KRUK's different and also promotes the brand on his Instagram.

Analyzing his socials, the Polish fighter seems to have a lavish lifestyle. He spent his vacations in beautiful holiday destinations.

The twenty-four years old hunk is among those MMA fighters who prefer their personal life private. Till the date, there is no news and rumors popped out in media sites regarding his relationship or girlfriend.

Active on Instagram with 10.1k followers, his account is filled with his MMA pictures and some from his traveling. However, on 15th Of September 2019, he has shared a picture with a beautiful lady. But, he has not pinpointed the lady as his loved one. 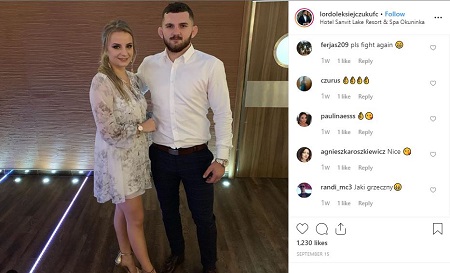 Seems like, the Polish man wants the only curiosity to his love life from his fan rather than providing personal details.

After Oleksiejczuk's UFC debut at UFC 219 against Khalil Rountree Jr., he was tested positive for clomiphene, an anti-estrogenic substance. Following the incident, the Nevada Athletic Commission (NAC) officially announced the no-contest to fight and he was suspended one-year by USADA.

On February 23, 2019, Oleksiejczuk returned to UFC to face Gian Villante at UFC Fight Night: Blachowicz vs. Santos. He won the bout via TKO in round one which also awarded him with Performance of the Night Bonus. He next defeated Gadzhimurad Antigulov at UFC Fight Night: Overeem vs. Oleinik via KO in 1st round.

As of now, Oleksiejczuk is expected to face Ovince Saint Preux at UFC on ESPN+ 18 on September 28, 2019.