Michael Malone is an American professional basketball coach who currently stands as the head coach of the Denver Nuggets in the National Basketball Association (NBA). Earlier, he was the head coach at Sacramento Kings and before that, he served as an assistant coach for Golden State Warriors, New Orleans Hornets, Cleveland Cavaliers, and New York Knicks.

Queens, New York native, Michael Malone was born on 15th September 1971, under the star sign Virgo. The forty-eight years old is an American by nationality and is of white ethnic background.

How Much Is Michael Malone Net Worth In 2020?

Michael Malone has been active in the coaching field since 1993. He spent two decades as an assistant coach and started his new role as head coach in 2013 with the Warriors and then Nuggets in 2015. On 24th December 2019, Nuggets announced that they had agreed to a contract extension with Malone, which would keep him until 2023. 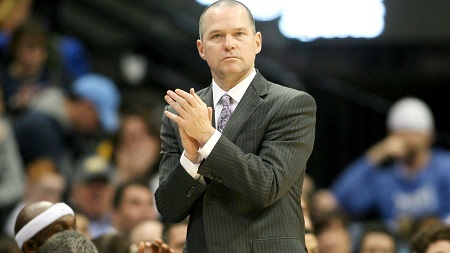 Though the financial detail about Malone's new contract is under wrap, his annual salary is reported $2 million. As of 2020, his net worth is approximately $8 million.

Who is he Married to?

Jocelyn Malone is the lovely wife of Coach Malone. She was born Jocelyn Anne Cole on May 21, 1974, to Robert and Sally Malone. Jocelyn was a volleyball player at Providence College from where she graduated in 1996.

Jocelyn and Michael Malone tied the knot in 1998. Nowadays, the couple is proud parents to two beautiful girls, Caitlin and Bridget.

Michael Malone is the son of former NBA head coach, Brendan Malone. Upon graduation from Seton Hall Preparatory School, he attended prep school at Worcester Academy in the 1988-89 school year. In 1994, he graduated from Loyola University Maryland with a degree in history. There he also played for the Loyola Greyhounds men's basketball team from 1989-1993 and totaled 370 points, 279 assists and 79 steals in 18.5 minutes per game.

In 1993, Malone became an assistant high school basketball coach at Friends School of Baltimore. In 1994, he joined Oakland University as an assistant coach. Further, he had the role of Providence and Manhattan.
In 2001, Malone moved up to the NBA as a coaching associate with the New York Knicks. Later, the Knicks promoted Malone to assistant coach in 2003.

On 3rd June 2013, the Sacramento Kings hired Malone as the new head coach, becoming the second father-son duo in NBA history. On 15th December 2014, he was fired by the Kings. On 15th June 2015, he was appointed the new head coach of the Denver Nuggets.