Michael Bennett is a retired American football defensive end. He finished his collegiate career at Texas A&M and was signed with the Seattle Seahawks as an undrafted free agent in 2009. Also, he played for the Tampa Bay Buccaneers, Philadelphia Eagles, New England Patriots, and Dallas Cowboys.

Independence, Louisiana native, Michael Bennett was born on November 13, 1985, under the star sign Scorpio. The thirty-four years old is an American by nationality and is of Afro-American ethnic background.

How Much Is Michael Bennett's Net Worth In 2020?

As of 2020, Michael Bennett has an estimated net worth of $30 million. He has earned his wealth widely through his NFL career.

Michael Bennett is married to Pele Bennett. The coupled tied the knot in 2012 after dating eight years long. Their wedding ceremony was held in Hawaii. 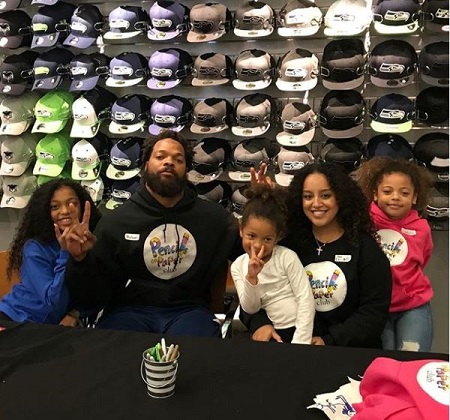 Michael Bennett with his wife and children SOURCE: Instagram @mosesbread72

Bennet and his wife share three children, all daughters. Scrolling through his official socials, he often features his family picture.

Michael Bennett was born to Penny Bennett and Michael Bennett Sr. Bennett has two sisters: Ashley Bennett and Renekia Leathers; and three brothers: Donte, Martellus, and Reshaud Bennett. Martellus also played in the NFL, a tight end who was drafted in the second round of the 2008 NFL Draft by the Dallas Cowboys.

He enrolled at Alief Taylor High School in Houston, Texas, where he played football, baseball and competed in track. After graduation, he attended Texas A&M.

On April 27, 2009, Michael Bennett signed as an undrafted free agent by the Seattle Seahawks. On October 10, 2009, he was waived by the Seahawks. Later two years, Bennett was claimed off waivers by the Tampa Bay Buccaneers.

On March 14, 2013, he was signed as an unrestricted free agent by the Seattle Seahawks. On March 7, 2018, he was traded to the Philadelphia Eagles in exchange for Marcus Johnson and a 5th round pick. On March 14, 2019, Bennett and a seventh-round selection in the 2020 NFL draft were traded to the New England Patriots in exchange for a fifth-round 2020 draft selection.

On October 24, 2019, Bennett was traded to the Dallas Cowboys. On July 21, 2020, Bennett announced his retirement from the NFL after eleven seasons.