Mehdi Shiri is a football player by profession. Shiri plays in the Persian Gulf Pro League side as a right back for the two times pro League Champion Foolad FC. The Iran international is one of the beneficial and vital players of the team. For your info, Shiri is the former Iran youth global at the U23 level. With Persepolis F.c, Shiri won the Gulf Pro league twice in a row in 2019 and 2020.

Mehdi Shiri, the defender for Foolad F.C, is a well-respected and experienced team player. He is a player with tremendous experience in various soccer leagues worldwide. So far, Shiri has been present in seven clubs such as Niroye Zamini, Malavan, Naft Tehran, Paykan, Persepolis and Foolad F.c. His defensive ability has nursed his team to achieve numerous league match victories. For your info, he fully devoted his time to soccer after joining Homa in 2003.

Have a look at Mehdi Shiri's bio, siblings and early life

Mehdi was born with the family name Mehdi Shiri on 31 January 1991 in the capital of Iran, Tehran. He was born under the sun sign Capricornus. Mehdi is 31 years of age. Shiri is one of the well-admired footballers in Iran. Further, the defender was raised and experienced most of his preadolescence period in Tehran. He is a Persian native of Asian origin.

Additionally, Shiri is born to Iranian parents. He, along with all his family members, holds an Iran citizenship card. Moreover, all of his family is a true devout Muslim who strictly obeys and practice its beliefs and idealogy. Yet, Mehdi has not flashed about his family details. As an outcome, thier identity, profession and location they reside in currently remain under the radar. Despite all that, he always had his family back behind public sight as everyone required it. Also, neither Mehdi nor any verified online site has given any facts on whether he has any siblings by his side.

The Tehran-born footballer has always been an energetic and talented player. He had participative nature himself since his youth. He used to take part in various curriculum activities at his school levels. His love and passion for soccer grew as time passed.

As I mentioned already, by age 12, the Iranian citizen joined Homa in 2003 to pursue his carrer as a footballer. There, he played until 2005. In addition to Damash Tehran, he played his amateur level at Saipa from 2005 to 2010. After that, he went to Damash Tehran and played until 2012. Finally, in 2012, the 31-years-old athlete set his foot into pro football, joining the Azadegan League club Nirooye Zamini for two years. Azadegan League, aka League 1, is the second highest division of professional football in Iran. Sadly, he spent all of his debut seasons on the bench.

Luckily, the following season, he got a call to join the 3x Hafiz Cup champion Malavan F.C of the Persian Gulf Pro League for the 2013-14 season. There, Shiri recorded 21 matches overall for the team. After completing his tenure, the 2018-19 Hafiz cup winner Shiri assured him of joining Naft Tehran on a two-year deal. Despite being a second-choice player for the team, he was still proving his worth there. The right-back was not consistently on a contract with the same. He remained on the transfer market list quite often. After his release from Tehran, he chose to join Paykan, signing a major three-year contract. 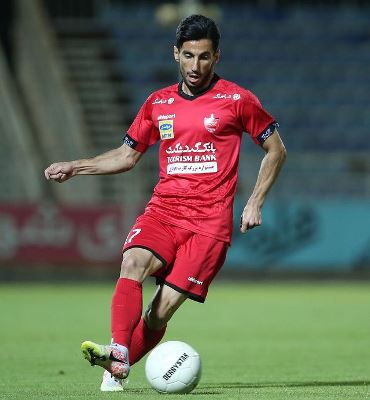 During his tenure, Shiri appeared in a total of 69 games, adding eight goals to his tally. In 2019, he made his move to Persepolis till 2022. He was not in good term with the club. Not to mention, the Iranian professional was dismissed from the team. However, the logic behind it is still a riddle. Finally, the dismissed defender of Persepolism joined Foolad in the first half of the season after agreeing on an official contract with Hamid Reza Garshasbi, the club's general manager. For Foolad, Shiri is out on number 21 on his jersey. So far, he has appeared in just four with one goal to his name for Foolad F.C.

Concerning his international career, he was an associated member of the Iran U23 group back in 2013. As a U23 player, he recorded his presence in three matches with a goal. Regardless, he is still yet to make his presence for the Iran national team.

Mehdi Shiri is a Persian native with a good height of 5 feet 7 inches or 1.71m. To preserve his body in good form, he works out daily. Shiri is the defender with an athletic body weighing 68 kg. Further description, he has black hair and eyes and is born with the Sienna skin complexion. Also, Mehdi has a short trimmed beard around his face.

What is Mehdi's marital status?

Eyeing his post on social media, he seems quite reserved regarding his personal life. However, peeking at his profile bio on Instagram, he has posted a ring emoji, which alludes that he is engaged to his beloved partner. Apart from that, there is no information regarding his love. Perhaps, he might be waiting for the right time for the reveal. He is certainly likely to get wedded very soon. We will update our tabloids on this as soon as it's online.

Mehdi's annual salary and net worth in 2022

Mehdi Shiri, the ex-Paykan player 36, has been on this field for more than 15 years. In this span of time, he has proved himself very well and earned the deserving spot. He makes most of his money playing football. In addition, Shiri has played for several top clubs. Thus to date, he must have acquired a huge sum of banknotes in his bank balance. Unlike the other league, the Persian league has not disclosed its player's salary numbers; consequently, it remains unknown. But, surely, Shiri receives his annual pay in six figures. 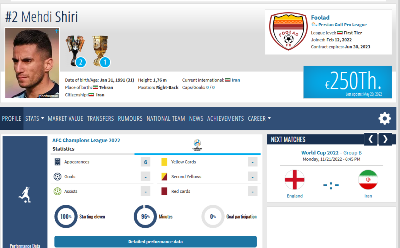 Per the sources, Shiri's present worth equals $ 6 million (approx), including all his assets. The player reportedly earns a handsome income only through involvement with various brands, commercial ads, etc. As of the current date, the Iran nationality market value per Transfermarkt is €250K. His carrer highest was €600K which was on 9 June 2018. Further, his contract with Foolad terminates on 30 June 2023.

Mehdi Shiri, the prudent and talented defender, seems to be a media-friendly person. He has strong fans based on his social media. Compared to others, Shiri is more active on Instagram. His Instagram handle is featured with a blue tick, insisting it's a verified account. The player's Instagram username goes like @m.shiri2 and has 936K followers. His Instagram feed is filled with football career shots that imply his love and passion for football. Via Instagram, he speeds to date his fans about his football-related news and events.