On May 11, 1994, Maxime Crepeau was born in Greenfield Park, Quebec. He rose to fame only after his successful career and grew up with his parents, Remi and Huguette. Crepeau spent his childhood with his brother Simon playing football in the backyard of their house. He stands six feet tall and weighs 88Kg.

Maxime Crepeau is a married man; aside from his professional life as a football player, he dated his long-time friend Cristina Dagenais. The couple changed their bond to marriage in late December 2017. Cristina has been one of the prime supporters in times of need for Crepeau.

After their marriage in late 2017, the couple was blessed with a beautiful girl named Lyvia on January 6, 2021. Crepeau posted many photos, including his wife, on his Instagram. Maxime Crepeau with his wife and child. SOURCE: [email protected]

The Canadian goalkeeper lives a happy life with his wife and daughter and loves spending his vacations with them.

Salary, Net Worth and Earnings of Maxime Crepeau

Maxime Crepeau has an estimated net worth of more than $2 Million. He credits most of his net worth to his successful career in football. Crepeau has been playing professional football since 2013. Since then, the player has been earning well enough as he has represented several professional clubs.

Maxime has been associated with Afterbang Eyewear and Accessories, where he might have pushed his net worth. He promoted the brand on Instagram posting.

"Happy to associate myself with Afterbang Eyewear and Accessories." Crepeau started his soccer career at the Montreal Impact Academy, where he played the 2015 to 2017 season; earlier, he sat as a backup goalkeeper in the 2015 CONCACAF Champions League Finals. 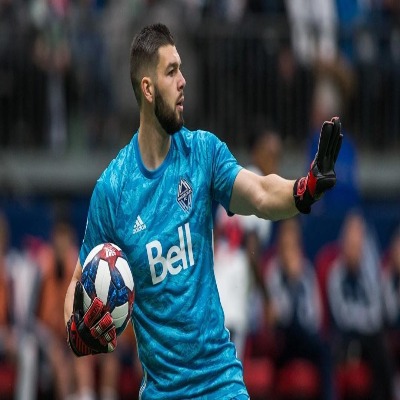 He was loaned to Montreal FC, where he made his professional debut and improved to be the #2 goalkeeper position in the Montreal Impact squad. Crepeau was traded to Whitecaps on December 9, 2018, exchanging $50,000.

Crepeau made his debut against Minnesota United and made it to starting lineup as a goalkeeper for Vancouver in 2019 and 2020.