Matthew Bozinovski is a professional Australian football player who plays as a defender for Wellington Phoenix and the Australian National team. The Australian national play as a center-back wearing jersey number 3. He is a young talented rising footballer who just kick off football professionally in 2018.

Matthew Bozinovski was born on 5 Jan 2001 in Charlton, Vitoria, Australia.  He is just 21 years old at the moment and his zodiac sign is Capriconous. Bozinovski is a right-footed player. He has represented Australia in various international tournaments and qualifiers.

Matthew's annual Salary and Earnings in 2022

The Charlton-born defender Bonzinoski is still very young and is in the early phase of his football career. He is yet to established himself well and yet to receive a huge amount of money from his career. Despite being a young player, he is top 14 highest-paid players of Wellington Pheonix with a netted annual salary of $85000.

His actual net worth is not transparent though but observing his annual salary it might be around $500K (assume).

The young Australian Defender has a market value of 5OK Euros. It will significantly increase if he performs consistently well in the future.

The Phoenix Center-back has a height like of NBA players. He has a medium-size body structure with long legs and hands. Bozinovski stands tall with an impressive height of 6 ft 4 inches or 1.95m. \

Moreover, he is from a white ethnic background and has a white skin tone with black hair. He weighs around 83 kg.

The right-footed Australia center-back had a keen interest in sports especially football since childhood. As he grew up his love and passion for football grew even more. The Charlton boy initiated playing football from his primary level. The very first club that he played for was the Australian Soccer club i.e Caroline Springs George Cross Football club.

He trained there for some time and joined Hume city after awards in 2017 in a one-year contract where appeared in just 4 games in a whole season. At the end of 2018, he was assured to join Melbourne  Victory NPL for 2 years deal as a youth player.

Bozinovski's performance there was impressive and he also played 47 games. Finally, in 2021, he was promoted to the senior team of the Melbourne Victory Football club but he didn't get to a play single match. Instead, he was sent to the Wellington Phoenix in a loan the same year he joined Melbourne Victory's senior team. 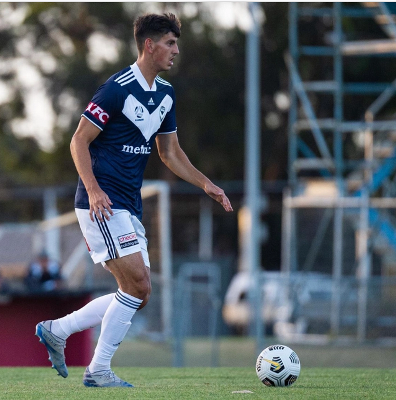 As an Australian national team player, he has represented his nation in the world cup qualifier, Afc qualifier, and many more. Phoenix Center-back is able to take his place in the regular squad of Australia.

Who is Matthew Bozinovski's Girlfriend??

The tall Australian center-back love life is still a mystery as he hasn't disclosed anything about his love life. He has kept life low-key due to which any rumors or information about dating status is unknown to the public.

Observing his social life on media, he seems to be single at the moment.

Matthew is available on various social media. He shares football news and life events with his fans via Instagram and Facebook. His facebook id is @Matthew Bozinovski.