Matthew Stajan is a Canadian professional ice hockey center player known for his versatility currently plays for the Calgary Flames of the National Hockey League (NHL).

He was a part of the Canadian National junior team that won a silver medal at the 2003 World Junior Hockey Championships. He debuted in the NHL in 2004 with the Toronto Maple Leafs.

Matt Stajan Early Life and the start of NHL

Born Matthew Stajan in Mississauga, Ontario on December 19, 1983. Matt is the son of Mike and Nada Stajan, and he has an elder sister, Michelle. Stajan is of Slovenian descent; both of his sets of grandparents immigrated to Canada in the 1950s. His paternal grandfather, Ludvic, started a company that manufactures fire doors that Mike and an uncle took over

Matt is one of the very versatile ice hockey player and during his earlier years, he played in the Greater Toronto Hockey League with the Toronto Red Wings during his early career at his hometown. Stajan wore jersey number 14 throughout his youth career and with the Maple Leafs in honor of his uncle Robert, who wore the number in his hockey career.

Matt played three seasons with the Belleville Bulls in the Ontario Hockey League (OHL) from 2000 to 2003 in which he scored 206 points in 182 games prior to which Stajan was also a team member of the OHL's Eastern Conference All-star Team in the Candian Hockey League's All-Star series.

In the 2002 NHL Entry Draft, Matt was a second-round selection at 57th overall of the Toronto Maple Leafs and made his NHL debut in 2004, since he played one more season with the OHL.

Stajan is one among many highly paid NHL players like Jonathan Toews, Sidney Crosby, and Patrick Kane. As of 2018, Matthew Stajan is estimated to be worth around $5 million.

Stajan made his professional debut on April 4, 2003, for Calgary Flames appearing in 69 games in his rookie season, where he scored 14 goals and recorded 27 points.

After the NHL play resumed in 2005-06, Stajan focused on developing his two-way play, trying to become both an offensive presence while also remaining defensively active. The season saw him finished with 27 points and led the league with eight short-handed points.

Being among Toronto's leading scorers, with 41 points in 55 games, Stajan was included in a high profile trade to Calgary Flames on January 31, 2010. After his move to Calgary, he finished the year with 16 points in 27 games which resulted in a combined total career high of 57 points.

After signing a 4 year deal with the Flames somehow Stajan's offensive production rapidly declined where he was able to score 31 points in 2010-11 and only 18 in the 2011-12 season, resulting him to drop from the scoring lines to the fourth line in a checking role.

2012-13 saw Stajan returning into form with the new head coach who expanded his role. Thus scoring 23 points in 43 games which he called his best season. Stajan suffered from leg contusion that sidelined him in the 2014-15 season but he rapidly recovered and the Flames made it to the playoffs for the first time since 2008-09 season.

Stajan still is affiliated with the Flames and during the 2017-18 season, he played his 1,000th NHL game where they lose 4-0 to the Anaheim Ducks.

While Stajan moved to Toronto from Belleville Bulls, Ontario he met his future wife Katie. Katie was the kind of women Stajan had been searching for and soon both got married. On March 3, 2014, Katie gave birth to their first child Emerson but the child died shortly after birth. 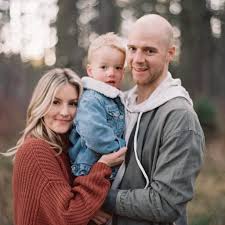 After a year the couple had their second child and they named him Elliot after their first born. Also following the demise of his first child, Stajan and his wife Katie raised an event called "A Night Under the Stars", which collected over $100,000 for the neonatal intensive care unit at Calgary's Foothills Medical Centre.