American professional baseballer Matthew Kent Olson is the first baseman and right fielder for the Oakland Athletics of Major League Baseball (MLB). He joined the MLB club in 2012 and has slowly developed his all-around performance since then.

Among many talented and famous faces in Oakland's  Athletics, Olson has been the main attraction this year and possibly will be in years ahead.

Matthew Kent Olson was born on March 29, 1994, at  Lilburn, Georgia. Since his childhood, Olson was very interested in baseball and after attending Parkview High School in his hometown, he was soon playing for the school team.

Words soon started to bloom about a talented new kid Matt Olsen, who was very good at both swinging and pitching the ball.

Income and Net Worth of Olson

The right-handed baseman and fielder is quickly making his place among the big boys of the team and with a salary of $507,500 which he made in 2016 alone, everyone can predict that Olson will be making tons of money.

Matt is currently estimated to have a net worth of $1 million but soon he will be signing a new contract which will bring him in 8 figure income.

Rising Career of the MLB Star

Matt Olson was then drafted by the Oakland Athletics in the first round of the 2012 Major Leauge Baseball draft.

He made his professional debut in 2012 against Arizona Leauge Athletics, also playing for the Vermont Lake Monsters the same season. On his debut season, he managed to hit .282//352/.521 with nine home runs in just 50 games.

Already considered as a prodigy, many of his hometown supporters think he will join the ranks among the greats like Alex Rodriguez, Derek Jeter, Kris Bryant to name a few. 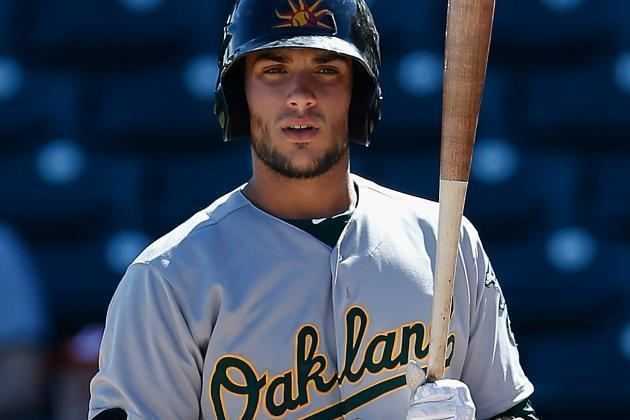 2015 and 2016 saw Olsen playing minor league season with the Double-A Midland RockHounds and Triple-A Nashville Sounds respectively. On September 12, 2016, The Athletics purchased his contract and he was called up to the major league club.

On April 18, 2017, Olson hit his first career walk-off, an RBI single to secure a 12-11 comeback win over the Chicago White Sox. He also hit 24 home runs which is a rookie record.

Olson also made 13 home runs in the month of September and one in five straight games which was tied for the third-most home runs in a player's first 65 career games in MLB history.

Olsen, who is quite famous in his hometown and is making a big name for himself in MLB likes to socialize and communicates with his fans via Twitter and Instagram. He often shares his pictures, giving little information about his activities and sometimes even makes a joke out of it.

There seems to be no confirmation by Matt or any other sources about his relationship or any rumors about him having a girlfriend or any sort of affairs. Matt says once he finds the special one, he will officially announce it to his family, friends, and fans.