Matt Barkley is an American football quarterback for the Buffalo Bills of the National Football League. He started his professional career with the Philadelphia Eagles. He later played for Arizona Cardinals, Chicago Bears, San Fransisco 49ers, and Cincinnati Bengals. He also played college football at Southern California.

He married his college sweetheart, Brittany Langdon in 2013. The duo has two sons together. His current net worth as of 2019 is reportedly around $2.5 million.

How Much Is Matt Barkley Net Worth In 2019? Know His Salary and Contract 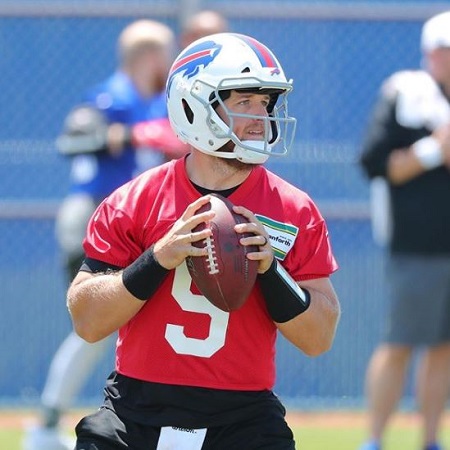 His cap hit for 2019 of $1.4M ranks 625th overall in the NFL, which includes his all roster and signing bonuses.

Matt Barkley is a married man. He tied the knot with his high school sweetheart Brittany Langdon in the year 2013. They are living happily together since after their marriage. There is no questions arise regarding their divorce.

The duo together has two sons. His elder son John, born in June 2015. He is a caring father. He hasn’t cheated his life partner and also not engages in an extramarital affair. 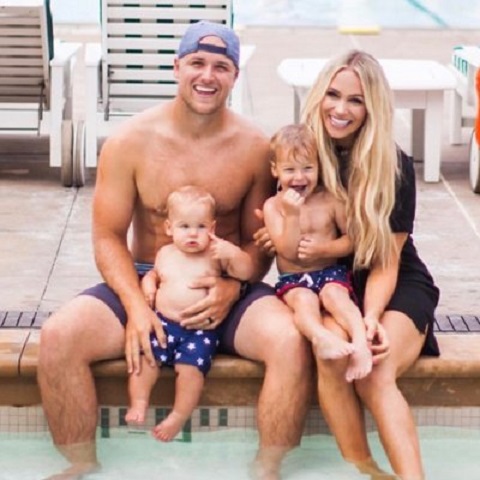 Matt Barkley with his wife and children SOURCE: Twitter

In July 2019, the couple announced that, they are expecting their third child, a baby girl.

He is a devoted Christian and believes in charities and social work. During Christmas 2008, his family and friends help to run an orphanage in South Africa. Again in Christmas 2010, she visited orphans, widows, villagers, and prisoners, doing construction work, distributing supplies and gifts and sharing daily fellowship in Nigeria.

He was born in 1990, on September 8 at Newport Beach, California. He is of American nationality and belongs to white ethnicity.  His siblings are Lainy Barkley and Sam Barkley. He is the son Les and his father has a business of insurance.

He attended Mater Dei High School of Santa Ana, California. He was a very good football player throughout his high school years. He was named 2007 football Gatorade National Player of the Year, and then 2007 Gatorade national male athlete of the year, and the first senior to win both awards.

After achieving his high school career, he attended the University of Southern California. He played with the USC Trojans football team, from 2009 to 2012.

He turned professional in 2013. He started his career with the Philadelphia Eagles. He played with the team from 2013 to 2014.

On October 31, 2018, he was signed by the Buffalo Bills. He made his start with the Bills against the New York Jets.

On December 21, 2018, he agreed on a two-year contract extension with the Bills through the 2020 season. His teammates include Josh Allen, Jason Croom, and Cole Beasley.