Mark Williams is a well-known Welsh professional snooker player. He has been playing professional snooker for almost three decades. Mark is a three-time world champion. Williams won his first World Champion in 2008 and his last in 2018 at the age of forty-three. He is ranked at no. 8 (as of 4 April 2022).

Mark Williams was born Mark James Williams on March 21, 1975, in Wales. He is the only child born to Dilywyn and his wife. His father worked as a miner and was the primary source to drive him towards playing snooker. He started playing snooker from his early teens and turned professional at the age of sixteen.

Mark Williams's Net Worth In Million

Mark Williams has an estimated net worth of more than $8 Million. Mark is among the oldest player to appear in the snooker tournaments currently. He has become successful in gathering most of his net worth through his snooker career. Williams is among the highest earnings snooker player in the world. 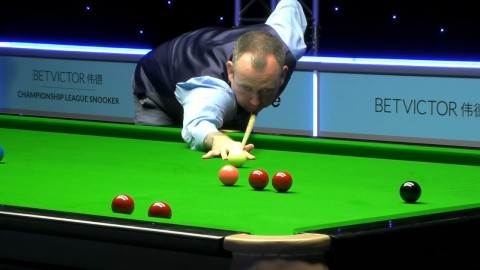 Mark plays his shot in a Snooker game in 2021 SOURCE: The Guardian

The Welshman is also the first left-handed player to win the World Championship. Williams has won 22 ranking tournaments overall. The professional snooker players have also compiled 486-century breaks during his career and two maximum breaks in competition.

Williams is a married man living a happy married life along with his wife and his children. Mark tied his wedding knot with Joanne Williams in 2011. They had been dating each other for more than a decade before walking down their wedding aisle. The love birds are yet to share a word about their first meeting instance. They had a private wedding ceremony in his Wohometown. 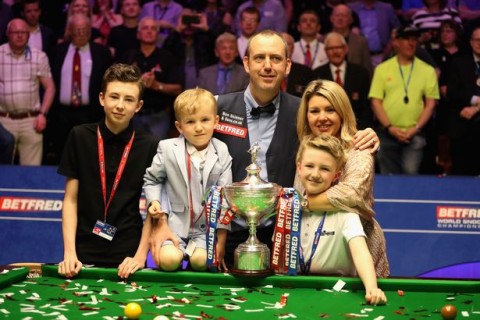 Mark along with his family in World Championship finale SOURCE: Getty Images

In April 2004, Mark and Joanne welcomed their first and eldest child, a son, Conor. The family of three extended to four after the birth of their second child, Kian, in 2007. In 2013, Williams opened about expecting their third child. Shortly after, they announced the duo had their third son, Joel.

Joanne is very much supportive of her husband. She keeps attending Mark's games regularly and takes her children along with her. In 2018, The whole family was seen wildly celebrating as their dad won his third world crown while Joanne was in floods of tears.

In 2003, Mark doubled his World Championship title-winning against Ken Doherty. Williams has been ranked the World number 1 for a total of three seasons in his career (1999/2000, 2000/2001, and 2002/2003). He is the only player to win three versions of three professional World championships. After 2003, The player could not impact the games and won his next titles in 2006.

In 2011, Williams won German Masters against Mark Selby. After this title, he was the runner-up in a few events and wait until 2017 to win his next major title win, Northern Ireland Open. In 2018, He won his third World Championship. Totaling his career titles wins, it reaches thirty-five in Major events and almost twenty in minor leagues.