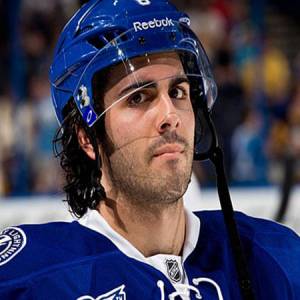 Mark Barberio is a Canadian professional ice hockey player who plays in the National Hockey League (NHL). As of 2019, Mark Barberio currently plays for the Colorado Avalanche as their Defence. Mark Barberio has played for other teams like Tampa Bay Lightning, Montreal Canadiens.

Further, As of 2019, Mark Barberio has an estimated net worth of over $2 million and earns around $1,450,000 as his yearly salary from Colorado Avalanche.

Mark Barberio's Net Worth and Salary

As of 2019, Mark Barberio has an estimated net worth of over $2 million similar to that Blackhawks Slater Koekkoek. Further, the NHL player has an average salary of $1,450,000 annually. Mark Barberio so far has made earnings of $7,466,577 from his entire NHL career.

He reportedly signed a two-year contract worth $2.9 million with Colorado Avalanche on May 15, 2018.

The contract includes a guaranteed sum of around  $2,900,000 along with a cap hit ao around $1,450,000. Gabriel Landeskog is also in the list of highest earners of the team with an annual average salary of around $6 million.

Mark Barberio hasn't shared any information on the media regarding his relationship status. Furthermore, there aren't any news published about his personal life so far. In addition to this, Mark might have a girlfriend or might have married but he hasn't given a single hint on his official social accounts suggesting his relationship.

Mark is a career-focused man and gives his full effort and time on his games and keeps himself away from rumors and controversies. By exploring his social sites, it can be confirmed that he has a supportive family behind him.

He spends his leisure time with his family members. Other than being a famous NHL Defence, Mark Barberio is pretty famous in social media.

The Famous NHL star is 6 feet 1 inch in height and weighs around 91 kilograms. Mark Barberio is not only a world-class athlete but also has a very attractive individual.

Mark Barberio was born on March 23, 1990, in Montreal, Canada. His mother's name is Joanne and has also posted her photo on his Instagram wishing her on her birthday. He also has an elder sister named Sara.

Happy Birthday to the best big sister in the world! Enjoy your day Sara ???? #?? #whysoseriousthough

As per his nationality, he is Canadian and belongs to the White ethnic group. Further, his star sign is Aries. He grew up along with his older sister Sara. After completing high school, Mark Barberio enrolled at Moncton and played for them.

Mark began his professional NHL career after being drafted in the 2008 NHL Draft by the Tampa Bay Lightning in the 152nd overall pick and he made his NHL debut against Ottawa Senators in 2013.

After playing over a season, he was left free agent and later signed by the Montreal Canadiens in 2015 and started playing for their AHL's affiliate. After that, he was traded to the Colorado Avalanche in 2017 and made his debut against Jets.

Currently, he is playing along with several reputed players of the Colorado Avalanche team including J.T. Compher.