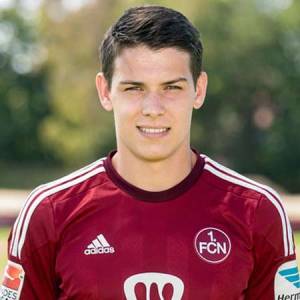 Mariusz Stepinski is a Polish footballer who currently plays as a forward for Chievo on a loan from Nantes and is also the member of Poland national football team. He previously played for Vidzeme Lodz, FC Nurnberg, Wisla Krakow, and Ruch Chorzow etc.

For the senior squad, Stepinski has played 4 internationals games.

Mariusz Stepinski was born on May 12, 1995, in Sieradz, Poland. Stepinski's mother's name is Renata Stepinska. Born in a middle-class family, he grew up with his sibling Krzysztof and Marcin.

Stepinski belongs to white ethnicity and holds a Polish nationality.

Mariusz Stepinski's current market value is estimated at £2.25million which was last updated on June 1, 2017. He is the brand ambassador of “Adidas”.

Mariusz Stepinski currently earns $ 0.6 million as a yearly salary from his current club, however, his net worth of 2018 is under review. His net worth can be estimated to be about $1 million.

His major source of income is his profession as a footballer. But the footballer also adds the good sum by endorsing and promoting products.

Stepinski began his career playing for the youth team of Piast Blaszki. He then played around two years for Pogon-Ekolog Zdunska Wola from 2009-2011.

Stepinski was then transferred to Widzew Lodz on July 1, 2011, with the transfer fee of £11 thousand and made his debut against Lech Poznan, making him the youngest ever player of Widzew Lodz in Ekstraklasa at the age of 16 years.

Mariusz Stepinski then signed a three year deal with 1.FC Nurnberg on July 1, 2013, for £108 thousand. He was then loaned to Wisla Krakow for the 2014-15 season, where he managed a total of 25 league appearances scoring 2 goals before returning to his parent club.

Stepinski joined Ruch Chorzow with the transfer fee of £90thousand on July 28, 2015. Before ending his career with the team in 2016, he scored 18 goals in 39 appearances.

Stepinski was loaned to Chievo Verona on August 31, 2017, with a buy-back option.

So far, he has scored 1 goal in 6 appearances for Chievo. Stepinski has a contract with the team which keeps him until June 30, 2020. He is the agent of “Kubacki Marcin”.

After representing the number of youth side, he earned his first senior cap under the coach Waldemar Fornalik on February 2, 2013, at the age of 17 against 4-1 win over Romania.

Stepinski has earned 4 national caps since 2013. Moreover, he was the part of the 2012 UEFA European Under -17 Football Championship.

Stepinski and his teammates Kamil Wilczek, Rafal Wolski and Karol Linetty were called up for the friendly matches against Uruguay and Mexico on 10 and 13 November 2017.

Mariusz Stepinski is involved in a love affair with his beloved girlfriend, Karolina Lisowska who is currently studying stylization and makeup in Katowice.

The duo is together for a long time since 2014 but they didn’t reveal anything about their love life in their early days of romance.