Maria Soledad Cabris Yarrús is better known as the former wife of the football star Edinson Cavani. Cavani currently plays as a striker for the National team of Uruguay and the French club Paris Saint Germain FC.

Maria Soledad was born in Uruguay in around 1989. No details about her family and childhood are known.

Maria is known for being married to Edinson Cavani previously. She is currently the single mother of her two children. Maria and Cavani were known to each other since their teenage and dated for several years before their marriage. They got married in around 2007. They had their first child, a son named Bautista on March 22, 2011. Maria gave birth to her second son Lucas on March 8, 2013. 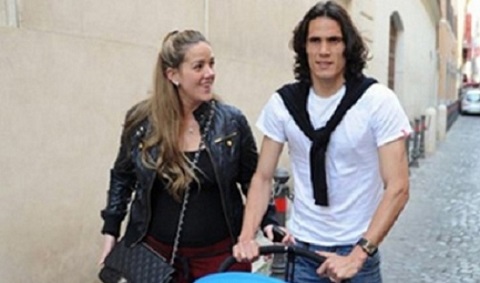 Later, her husband was rumored to be dating an Italian then 22-year-old model María Rosaria Ventrone after his move to Italian club Napoli.

Maria separated from her husband in 2013 and the divorce was finalized in mid-2014.

After being cheated, Maria said:

“I do not trust this man. Do you want to trust a husband who leaves his wife just a few days after the birth of their child?… When our son Lucas was born, I learned that he was with another girl. It was a shock when I saw the nasty pic. He explained the benefits of me giving birth in Uruguay to be quieter than in Naples where we would be besieged (by the press). He wanted to leave me there to feel freer and enjoy the fact that I would be busy building our new life. When I returned, I tried in every way to save our marriage. I did not want to remove my children from their father, I thought we could recover. It was hopeless. Edinson became a different person and unrecognizable.”

Maria later filed for child and spousal support. The decision on her favor and Cavani was ordered to pay $25,000 every month as child support.

Cavani is currently reported to be dating his girlfriend Jocelyn Burgardt for a couple of years. Jocelyn is a model and samba dancer originally from Uruguay.

No details about her professional career are available so, there is no point in receiving a salary. However, as mentioned above, she receives $25,000 a month as child support from her former husband Cavani. Cavani is reported to have a net worth of $40 million.