Merak Rodak is a rising Slovak professional football player. He is currently playing at the English Football League Championship for Fulham. Marek turned professional in 2014 with Fulham and has been playing with it. Rodak plays as a Goalkeeper for his club and country.

Marek Rodak was born on December 13, 1996, in Kosice, Slovakia. He is the son of Marek Sr and his wife. Much about his parents and his early life is under the radar. Rodak completed his primary education and started his football career. Talking about his physical appearance, Marek stands six feet and five inches tall and weighs 81 kg.

Marek Rodak has an estimated net worth of more than $2 Million. The player has earned most of his net worth through his salary and earnings. A football player has multiple sources of income, including sponsorship and advertising deals. Rodak must be receiving a handsome amount from his national team. He is valued at €5 million in the 2022 season. 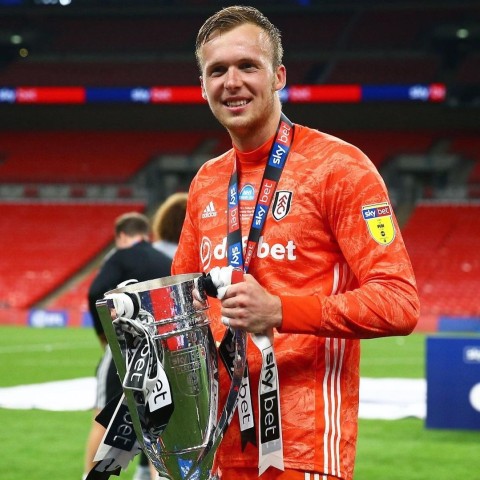 Who is Marek Rodak Dating? Know About His Relationship Status and Girlfriend

Marek is an active social media user. He is very open about his relationship status. Following his Instagram profile, we can be sure that Rodak is dating his longtime girlfriend, Noemi Kovacsova. The duo has been together for more than a year. They posted a photo of their vacation in Croatia in August 2020. Noemi is a model and a basketball player. She was the finalist in the Miss Universe. Both are very early in their career and will be waiting for the right time to get married. They can be seen going on holiday vacations regularly.

Marek started playing football along with his father in their backyard. He joined MFK Kosice's youth academy in his home country and trained with them until 2013. Rodak was called for a trial by Fulham and signed his first major contract with the club. In early 2014, The player earned his senior team call and made his professional debut.

Marek was loaned to Farnborough in the early 2014 season but returned to the club after appearing in five matches and then joined Welling United until the 2015/16 season. He appeared in seventeen games for the club. In the 2017 season, The player played for Accrington Stanley and appeared in twenty games. From 2017 until 2019, Rodak played for Rotherham United and appeared in eighty games.

In 2020, Marek extended his contract with Fulham until summer 2024 for an undisclosed fee. None of them have shared about the agreement.