Marc Cucurella is a Spanish footballer who currently plays for Premier League club Brighton & Hove Albion as a mainly wide midfielder and also left-back. Earlier, he played for Barcelona and Eibar. In November 2020, he was called up to the senior Spain national team.

How Much Is Marc Cucurella's Net Worth In 2022? Salary & Market Value

Marc Cucurella who is signed to Brighton & Hove Albion earns a seven-digit figure per annum. Earlier he played for Barcelona and Eibar Getafe before Brighton & Hove Albion where he earned £23,000 per week, which is £1,196,000 per annum from the club. Besides salary from the Getafe and Span national team, makes money from endorsements as well. He has signed a deal with Puma.

Marc Cucurella's Wife: Is He Married?

Spanish footballer, Marc Cucurella is yet to get married but he ain't single. In fact, he is already a father. 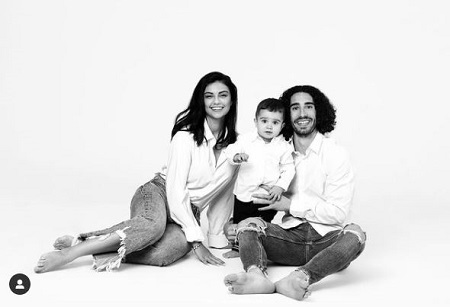 Marc is currently in a relationship with Claudia Rodriguez, who is also a mother to his son. Though it's unclear when the two started dating he first posted their photo on IG in April 2018 while Claudia Rodriguez came public a month earlier.

In October 2019, they welcomed their first child, a son, Mateo Cucurella Rodriguez.

Cucurella began playing futsal in FS Alella prior to entering RCD Espanyol's youth teams in 2006. In 2012, he joined FC Barcelona playing in the various youth systems.

While still a junior, he made his senior debut with the Barcelona B team by starting in a 4–0 Segunda Division B home routing of CE L'Hospitalet on 26 November 2016. On 24th October 2017, Cucurella made his first-team debut coming on as a late substitute for Lucas Digne in a 3–0 Copa del Rey away victory over Real Murcia.

On 31 August 2018, Cucurella was loaned out to SD Eibar, for a season with a €2 million buyout clause. At the end of his loan, Eibar exercised Cucurella's clause, signing him as a permanent player along with the transfer, Barcelona added a €4 million buyback option.

However, after sixteen days at Eibar, Barcelona triggered Cucurella's €4 million buyback clause on 16 July 2019, only to loan him out to Getafe CF two days later for the 2019-2020 season, with an option to buy for €6 million and 40% of the rights remaining to Barcelona.