A Senegalese professional footballer, Mame Biram Diouf currently plays for Stoke City as a striker. He previously played for Hannover 96, Manchester United, and Molde, having begun his career at Diaraf in 2006.

Besides his club career, Diouf is in the Senegal national football team since 2009 and has been capped 45 times with ten international goals. Also, the footballer has represented his national side in biggest football event, 2018 FIFA World Cup in Russia.

Mame Biram Diouf was born on 16th December 1987, in Dakar, Senegal, to Gnilane Diouf. Regarding his nationality, Diouf is a Senegalese and belongs to African ethnicity.

Diouf has a sister and two brothers: Abdul Biram Diouf and Mame Mbar Diouf, who is also a footballer and has played for TSG Neustrelitz, Sarpsborg 08, and Molde.

The Stoke City football star, Diouf earns £3.3 million annually with weekly pay of £65k. As of May 2018, his market value is recorded at €7 million.

Though he has not publicized his exact figure of net worth, looking at his successful football career, his net worth is assumed to be no less than the seven-digit number.

Diouf began his football career with Diaraf in 2006. However, he did not play any professional game for the club.

The following year, Diouf switched to Norwegian club, Molde. He remained two seasons with the club, amassing 29 goals in 62 games.

On 17th July 2009, Diouf signed to Manchester United for a reported transfer fee of €4.50 million. On 1st August 2009, he was loaned to his former club, Molde for the remainder of the Norwegian 2009 season.

Upon his arrival to Manchester United, he was assigned the 32 number jersey on 7th January 2010. Later two days, he made his league debut in a 1-1 draw with Birmingham City. His home debut came on 16th January 2012 in a 3-0 victory against Burnley.

On 6th August 2010, he moved to Blackburn Rovers, signing a season-long loan deal.

In the summer of 2011, Diouf returned to Manchester United and soon he was included in the team for their pre-season tour of America.

On 11th June 2014, Diouf arrived at Stoke City on a free transfer. On 16th August, he made his Stoke debut in a 1-0 loss against Aston Villa.

On 12th August 2009, Diouf made his Senegal international debut in a 2-1 friendly victory against Congo DR. His first goal for his national side came on 11th August 2010 in a 1-0 win against Cape Verde.

In May 2018, he was named in Senegal’s final squad for the 2018 FIFA World Cup along with his teammates Keita Balde, Moussa Sow, and Salif Sane.

Mame Biram Diouf started dating Maria Orten in 2007. After being in an affair for four years, long both decided to take their relationship to the new level. In the midst of their wedding plans, Diouf went missing a few days before the wedding ceremony, with his fiancé blaming his disappearance on Pape Pate Diouf. Eventually, he showed up on 30th June 2011, nonetheless, the pair didn’t reveal the reason for his absence. On 2nd July 2011, Orten and Diouf tied the knot at Nordbyen church in Molde. 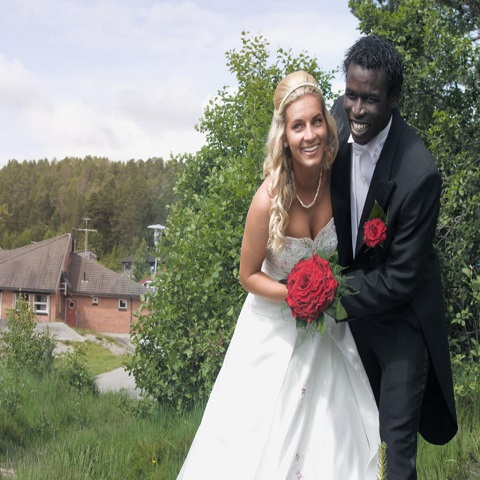 Diouf is active on Instagram with 37.4 k follower but he rarely shares his family pictures.

In the 2015 Mina stampede in Saudi Arabia, Diouf lost his mother, while his sister survived with minor injuries.