Maksim Belyayev is a well-known Russian professional football player. He is currently playing in the Russian Premier League for Arsenal Tula for six seasons. Belyaev turned professional in 2009 and made his debut with Lokomotiv Moscow. Maksim plays as a defender for his club and country.

Maksim Belyayev was born Maksim Aleksandrovich Belyayev on September 30, 191, in Azyory, Moscow Oblast. He is the son of Aleksandr Belyayev and his wife. Maksim is very private about his parents and early life. Belyayev stands six feet and two inches tall and weighs 86 kg.

Maksim Belyayev has an estimated net worth of more than $2 Million. The player has earned most of his net worth through his successful football career. Belyayev is among the highest-earning player for his club. Also, He must be receiving a handsome amount from his country for representing them at several international events. 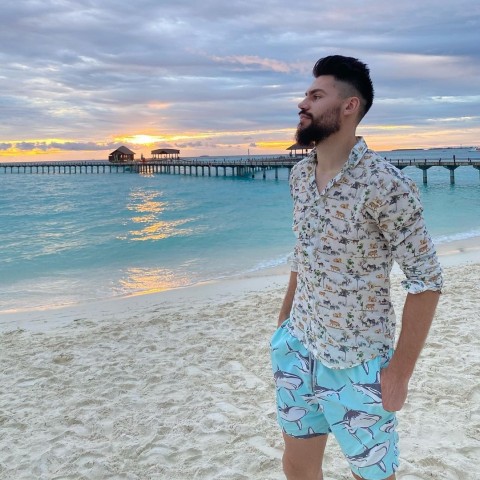 Maksim shares a photo of his vacation at Maldives SOURCE: [email protected]

Maksim receives an annual salary of £572,000 per his contract with the club. He has a weekly wage of £11,000. Igor Smolnikov is the highest-paid club with a yearly salary of £988,000. Belyayev is very early in his career and will be adding millions in the future.

Who is Maksim Belyayev Dating? Know About His Girlfriend and Relationship Status

Maksim is an active social media user. Belyaev is married to his longtime girlfriend, Kristina Larina. The love birds exchanged their wedding vows in June 2017. They had a beautiful and lavish wedding ceremony. The couple had invited only a few members from both the families and some close friends to their wedding. Kristina is a Russian actress and has acted in numerous films.

A Decade in Football

Maksim Belyayev started training football at the age of eight. He joined his hometown club, Spartak Moscow, in 1999 and trained with them until 2005. The player represented the club in numerous divisions and moved to Lokomotiv Moscow. Belyayev made his Russian premier league and senior team debut in July 2009. Maksim signed a three-year contract with the club and played for the rest of the season.

Belyayev struggled to make it into the first team and was loaned to Dynamo Bryansk for loan season, but after the mid-season break, He moved to Torpedo Vladimir for the rest of the season. Maksim was loaned to FC Rostov for a short term in the 2013 season. After his contract expired in early 2015, The player moved to Shinnik Yaroslavl for a season. He appeared in sixteen games in that season.

In early 2016, Maksim moved to Arsenal Tula as a free transfer and signed a five-year contract. In the next five seasons, The player appeared in more than 140 games and scored four goals. His contract expired in 2021, and he did not renew his contract. After six months, He signed his contract for two years with Tula and returned to training.

Maksim made his national team debut in 2010 with the Russian U-19 team. He appeared in four games for the divisions. The player was then part of the U21 team in 10 games. In 2019, Belyayev earned his senior team call and debuted in the UEFA 2020 qualifier against San Marino.