Bangladeshi nationality Mahbubur Rahman Sufil is a professional soccer player who plays as a forward for Bangladesh Premier League side club Bashundhara Kings and the Bangladesh national team. Mahbubur even led Arambagh KS in the 2017-18 season in the Bangladesh premier league.

On 10 September 1999, the Bangladesh rising player Mahubur Rahman Sufil was born in the beautiful local place of Bangladesh called Moulibazar with the star sign Virgo. Presently, he is just 22 years of age. He kicked off his football journey in 2017. Mahbubur represents himself wearing jersey number 17.

Bangladeshi player Mahbubur had a keen interest in football from an early age. He used to participate in various sports during his schooling. At age 18, he made his professional debut in the 2017 Bangladesh Premier League with Arambagh KS. The twenty-two-year-old forward, Mahbubur, played a single season for Arabadgh KS, appearing in overall 21 games, sending the ball two times behind the net. 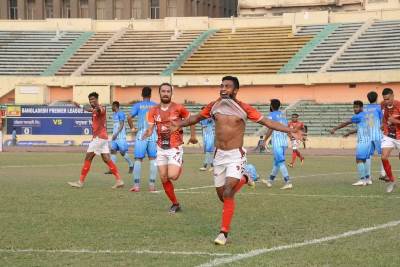 Sufil scoring the winning goal for the team SOURCE: Facebook

He was given the massive responsibility of captaincy at the club, which he fulfilled at his best. After the end of his contract, he joined Bashundhara Kings on 1 July 2018. He is in the regular squad of the team and has played in 37 games in total.

The Bashundhara forward Mahbubur also fulfilled his national duty as well. Sufil has appeared for the national U20 in the 2017 SAAF U18 Championship and the 2018 AFC U19 Championship qualification.

As a senior player, he debuted on 27 March 2018 in a friendly match against Laos.

Despite being in his early 20, he is already married to his very old friend Zinnat. The couple was friends from school. As they grow up, they develop feelings and attraction toward each other, which later turn into a happy marriage. After dating for some time, they decided to get into a permanent knot in 2020. Currently, they are pleased and satisfied with each other. They both support each other in their career.

Mahbubur Rahman Sufil is in the early phase of his career and still yet to earn millions shortly. The Bashundhara Kings Forward Sufil salary numbers are still not transparent. Observing his luxurious lifestyle on social media, he seems to be making a handsome amount of money from football.

Besides football, he also adds a considerable fortune to his net worth from brands, sponsors and endorsements deals. Hence, as per the sources, his approximate net worth is below $1 Million. 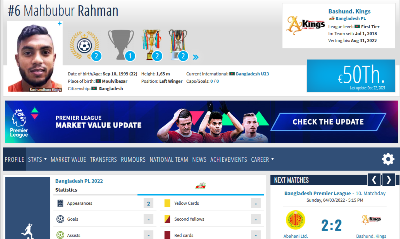 As of 2022, Sufil holds a market value of €50K. The market value will rise according to the player's game form and consistent performance.

The Bangladesh International Sufil is a regular media user. He is pretty active on Facebook, by which he outgives his life happenings and sports news to his fans and followers. His Facebook id is @Mahbubur Rahman Sufil, and he has followers of more than 19K.