Madelene Sagstrom is a Swedish professional golfer who competes in the LPGA Tour and the Ladies European Tour. Her best achievements include a T11 at the 2017 Women's PGA Championship, T17 at the 2018 US Women's Open, T20 at the 2018 Women's British Open, and a T52 at the 2019 ANA Inspiration.

Sagstrom was born in Uppsala, Sweden on November 13, 1992. She began learning golf with her parents at Enkoping Golf Club. At 16 years old she won the 2009 Swedish Junior Stroke play Championship over 72 holes at Osteraker Golf Club. In 2011, she won the French Junior Championship, at Golf de Saint-Cloud outside Paris. A member of the winning Swedish squad at the European Ladies' Team Championship in Austria, Sagstrom played college golf with the LSU Lady Tigers team at Louisiana State University.

A 2015 SEC Player of the Year, Sagstrom made her professional debut at the 2015 Heisenberg Open on the Ladies' European Tour in Sweden in September. She finished inside the top 5 in her first five starts at the Symetra Tour in the United States (2016).

She then became victorious both at the Chico Patty Berg Memorial in Fort Myers, Florida, and the Self Regional Healthcare Foundation Classic in Greenwood, South Carolina. She secured the top spot on the final Volvik Race for the Card money list after her win at the Murphy USA El Dorado Shootout. Madelene Sagstrom before the start of the 2020 season SOURCE: Instagram

The Uppsala-born golfer had a record-breaking Symmetra Tour season, winning Player of the Year and Rookie of the Year honors. In 14 Symetra Tour starts, she had three wins and 11 top 10 finishes. In December 2016, she won the Ladies European Tour's Q School and consequently secured a membership at the Ladies European Tour (2017). She was enlisted as a captain's pick by Annika Sorenstam to 2017 European Solheim and finished the 2017 LPGA Tour season 49th on the Order of Merit.

The Swedish managed to place herself in second at the Pure Silk Championship on the LPGA Tour in 2019. She got her first win on the 2020 LPGA Tour at the Bainbridge LPGA at Boca Rio played at Boca Rio Golf Club in Boca Raton, Florida.

Sagstrom finished with a one-shot lead after making par on the final hole against Nasa Hataoka who made bogey. She became the 12th Swedish winner on the tour after clinching the 117th LPGA Tour.

Also Read: World no 2 Inbee Park's Net worth and Boyfriend

In 2017, also the first time, that Sagstrom had ever made into the cuts, she in toto pocketed around $412,574 generated out of 14 competitions. Her biggest takeaway of the season was at the KPMG Women's PGA Championship where she made $61,963 after finishing 11T with an average score of 69.75. Her overall career proceedings stand over $1 million, a feat which she achieved in January 2020, reports Golf Week. To that end, the figure that might best coincide with her real net worth would be any sum between $500,000 to $1 million.

Madelene Sagstrom's Relationship With Her Boyfriend and Sexual Abuse

The 28-year-old Scandinavian golfer is currently in a relationship with Jack Clarke. She first met Clarke at the UL International Crown three years ago and the pair have been dating for over a year. During their first encounter, the future boyfriend of Sagstrom was caddying for a different player on the Swedish team, Anna Nordqvist.

Clarke's father Alan had caddied for her at the Bainbridge LPGA, Boca Rio in January 2020. 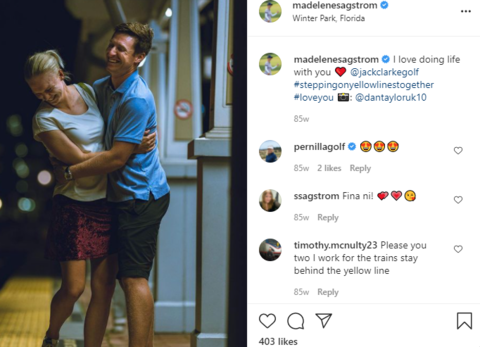 In February 2021, the three-time winner on the Symetra Tour in 2016 opened about her horrific past when she was sexually abused at the age of seven by a family friend. As per the golfer, the perpetrator lived nearby in the Swedish countryside about an hour outside of Stockholm. She used to return home afterward and pretended like nothing ever happened.

Sagstorm had first opened about the painful event in 2016 to her coach, Robert Karlsson in a hotel room in Greenwood, South Carolina. She said the day had haunted for years and did everything to escape from it. She, though, now maintains that 'she owns her story, her history and subsequently the person who she is growing into.'