Luke Brooks is one of the most respected sports celebs who is an Australian rugby league footballer for the West Tigers in the National Rugby League. He is playing at the position of a halfback and made an appearance for the NRL All-Stars in 2015. His professional career started in 2013.

The twenty-four years old hunk reportedly earns $550,000 and has an estimated net worth of $1 million. Regarding his love life, he is possibly single and unmarried.

How Much Is Luke Brooks Net Worth In 2021? Know His Salary and Contract

Thanks to @beatsbydre for the new headphones! #beatsbydre

Furthermore, he earns much from his endorsement deals. Some of his popular brands endorsed are Nike, Beats, Brighter Bite, and Pain Away.

When it comes to his personal life, he has not shared any of info about his affair, wife, and girlfriend. It seems he is not married. Neither, he has any wife. He might be in a relationship with his girlfriend. However, info regarding his affair still unknown to his fans. He has not talked about his sexual orientation. His sexuality seemed to be straight. Till now, he has not been the part of any controversy. He is very close to his family. In their free time, he loves to watch soccer on the television.

For his performance, numerous awards and rewards have honored him. He has numerous fans and followers from around the world.

Early Life Luke Brooks was born on 21 December 1994, in Sydney, New South Wales, Australia. Regarding his nationality, he is Australian. His ethnicity is unknown at this time. His star sign is Sagittarius. Luke Brooks raised in his birthplace.

Before being professional, he started his early career with the Holy Cross Rhinos. Later, he also played for Leichhardt Wanderers. In 2012, he played for the Australian Schoolboys and played in the Balmain Tiger’ S.G. Ball Cup.

Upon competing in the junior levels, he turned professional in 2013. In the round of 24 of 2013, he made his debut for West Tigers against the St. George Illawarra Dragons. He played remarkably in 2013 season. For his terrific performance, he was named halfback in the 2013 NYC Team of the Year. In 2014 season, he became the regular halfback for his team. He performed in 21 matches, scored six tries and kicking one field goal. 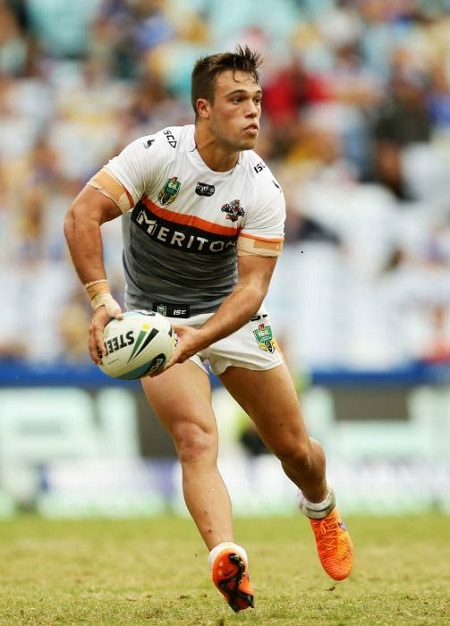 The year 2015 was outstanding for him. He finished the season with ten tries from 23 appearances. The year 2016 was not fruitful for him. In 2016, he suffered from a severe knee injury towards the end of the season. On 18 April, Luke Brooks re-signed a new contract with the West Tigers until the end of 2019. His teammate includes Benji Marshall.