Luis Carlos Ovalle Victoria, a.k.a Luis Ovalle is a Panamanian professional footballer who currently plays for Atlético Venezuela as a winger. Previously, he played for various football clubs including Deportivo Olympia, Deportes Tolima, Zamora, Patriotas, Chorrillo, and Monterrey, having made his professional debut with Sporting San Miguelito in 2005.

Apart from his club career, he is in the Panama national team and has been capped 27 times, since 2010 and was also among the 35-man preliminary squad for the 2018 World Cup.

As of 2019, his annual salary is estimated to be $55,000 with a weekly salary of $1000 playing for the Venezuelan football club, Atlético Venezuela and has a market worth in the range of $120,000. Though he has undisclosed his exact figure of net worth, looking at his successful career, Ovalle’s net worth is assumed to be no less than a six-digit number. 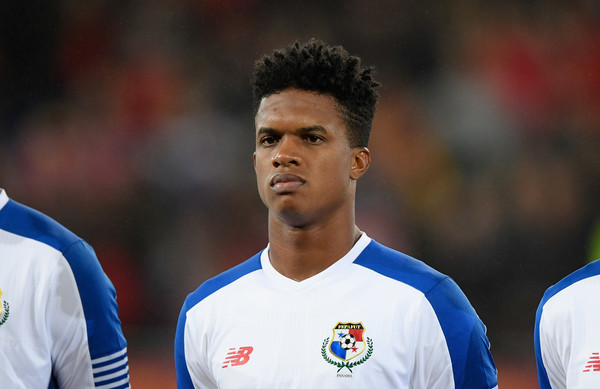 A professional since 2005, he has played for various clubs till date and has reportedly earned about $1 million.

The Panamanian former international is a married man who exchanged the wedding vows with his long-time girlfriend, Roxy Sanchez. The duo shares a baby boy named Luis C. Ovalle jr.

The couple has set their Instagram profile private and is reportedly far from the media. Luis Ovalle, 29, stands five-feet-ten-inches tall and weighs 71 Kg.

Luis Ovalle was born on 7th September 1988, in Panama City, Panama. His star sign is Virgo. By nationality, he is a Panamanian and belongs to African ethnicity.

At his tender age, he began his footballing career with Sporting San Miguelito.

Following various youth-system at Sporting San Miguelito, Ovalle made his debut for their senior side in 2004. He remained overall three seasons and played 57 matches and scored 11 goals. Also, he enjoyed loan spell with Monterrey B.

In summer of 2010, he returned to his former club, Sporting San Miguelito. In 2012, he was loaned out but this time to Patriots where he played just two matches.

On 1st January 2013, Ovalle signed to Zamora. He remained four seasons with the club and made 136 appearances and scored 3 goals.

On 23rd July 2017, he switched to Deportes Tolima. He played only six matches for the club.

Luis Ovalle has represented his national side, Panama national team both at junior and senior level. He was a part of the Panama U-20 national tea, which participated in the 2007 FIFA World Youth Cup in Canada.

In December 2010, he made his international team debut in a friendly match against Honduras.

In May 2018, Ovalle was named in Panama's Preliminary 23 man squad along with his teammates Alex Rodriguez, Roman Torres, and Erick Davis for the 2018 FIFA World Cup in Russia.