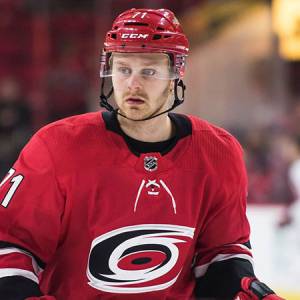 Lucas Wallmark is a Swedish professional ice hockey player who plays in the National Hockey League (NHL). As of 2019, Lucas Wallmark currently plays for the Carolina Hurricanes as their center.  Further, he was selected by the Hurricanes at the 2014 NHL Entry Draft in the 4th round, 97th overall.

Lucas Wallmark reportedly earns around $675,000 as his yearly salary from Carolina Hurricanes. Further, Lucas Wallmark has an estimated net worth of over $500,000. Additionally, there isn't any news about him being in a relationship in recent time.

According to the reports, Lucas Wallmark is an unmarried man. Further, his relationship status is single too. He is not spotted talking or sharing any picture about the love of his life. Additionally, he hasn't dropped a single hint about his girlfriend or probable wife. 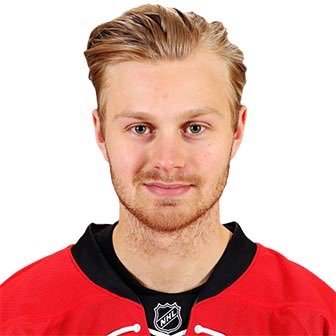 Being a celebrity, Lucas Wallmark has maintained his personal life low profiled. He seems to be a secretive person. So he could be in a secret relationship or have got married. He is too adorable to be single.

Talking about his physique, the famous NHL star is 6 ft 0 inch in height and weighs around 80 kg.

Lucas Wallmark Net Worth and Salary

Further, the NHL player has an average salary of $675,000 annually whereas Nino Niederreiter is one of the highest earners of the team with an annual salary of $5,250,000. Lucas Wallmark so far has made earnings of $1,497,860 from his entire NHL career.

Lucas Wallmark was born on 5 September 1995, in Umeå, Sweden to parents Peter Wallmark and Cathrine Wallmark. As per his nationality, he is Swedish and belongs to the white ethnic group. Further, his star sign is Virgo.

Wallmark made his Elitserien debut in the 2012–13 Elitserien season with Skellefteå AIK. He moved to SHL rivals, Luleå HF, with whom he spent the following year three seasons.

He was selected by the Hurricanes at the 2014 NHL Entry Draft in the 4th round, 97th overall. On 11 June 2015, Wallmark signed with the Carolina Hurricanes a three-year entry-level contract.

Wallmark scored his first NHL goal with the Hurricanes in a game against the St. Louis Blues during the 2017–18 season on December 30, 2017.

Currently, he shares the arena with his star teammates such as Micheal Ferland, Warren Foegele and many more.