Louis Smolka is a professional mixed martial artist who currently competes in the bantamweight division of the Ultimate Fighting Championship (UFC). Previously, he competed at King of the Cage and Pacific Xtreme Combat where he was the Flyweight Champion. As of July 19, 2016, he ranked #9 in the official UFC Flyweight rankings.

Louis Smolka was born on July 16, 1991, in Kapolei, Hawaii, United States. He is American. His ethnicity is unknown at this time. His star sign is Cancer. He is very close to his parents.

Louis Smolka was born and raised in his birthplace. From an early age, he was passionate about martial arts and his parents equally supported his decision to become an MMA fighter in the future. He attended Community college but dropped out after his sophomore year to pursue fighting full-time. He worked as a Mascot for Papa John’s and dishwasher for a sushi restaurant before being a fighter.

Louis Smolka started his amateur career in 2010. He turned professional in 2012. On April 28, 2012, at Destiny MMA-Unleashed, he made his professional MMA debut against Shane Pacarro. He won the fight via TKO (doctor stoppage) in the third round.

In late 2013, he signed with the UFC. He made his promotional debut against Alptekin Ozkilic at UFC Fight Night 35 on January 15, 2014. He comes out with a victory with a unanimous decision. Later he faced Chris Cariaso, he lost the fight in the third round. On April 15, 2017, he faced Tim Elliot at UFC on Fox 24. He lost the fight via unanimous decision. Both fighters were awarded Fight of the Night for their performance.

When it comes to his private life, Louis Smolka has maintained a low profile regarding his personal life. He is married and has a daughter who is still young. He is tied in a marital relationship with Yumi Nagamine. He has a daughter named Lucy Smolka who is 4 years old as of 2020.

His wife Yumi is a rapper and bakery owner who also reviews food. 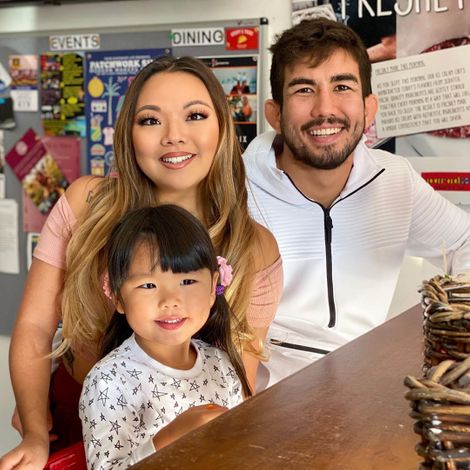 Louis Smolka with his wife and daughter SOURCE: [email protected]

Louis Smolka has bagged lots of experience throughout his work and performance. He has reached the age of 25 now. He has a good height of 5 feet and 9 inches, which is around 1.75m. His weight is 57 kg.

He is one of the most popular MMA celebs on social networking sites. One can go through his tweets on Twitter. He also uploads his posts and photos on Instagram and Facebook.