Otley, West Yorkshire native, Lizzie was born on 18th December 1988, under the star sign Sagittarius. Daughter of John Armitstead and Carol Armitstead, she is a graduate of British Cycling's Olympic Podium Programme.

How Much Is Lizzie Deignan's Net Worth In 2021?

From the above data, it could be said Lizzie Deignan makes €20,000 per annum excluding sponsorship, endorsements, and win prize money. With these, Deignan is believed to be making at least five-digit figures per annum.

Lizzie Deignan is married to an Irish former professional road racing cyclist Philip Deignan (born 7 September 1983). The couple tied the knot at The Bridge Church in her hometown of Otley, West Yorkshire in front of 150 guests in August 2016. They started dating in 2014. 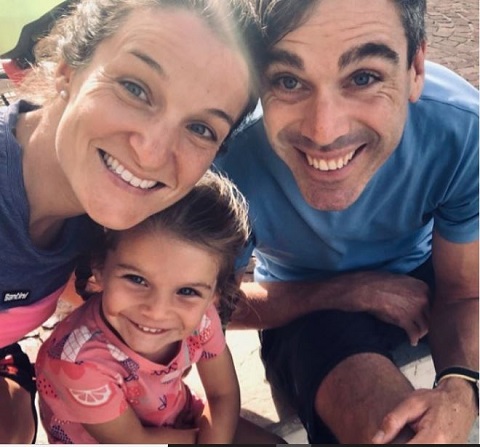 Lizzie Deignan with her husband and daughter SOURCE: Instagram @l_deignan

Now the couple is a proud parent to their only daughter Orla. Lizzie often shares pictures of her husband and their daughter on her IG.

Deignan took up cycling in 2004 after following  British Cycling's Olympic Talent Team while visited the  Prince Henry's Grammar School while she was enrolling. Before, her road career Lizzie won five medals at the UCI Track Cycling World Championships.

In 2010, she joined Cervelo Test Team, winning 3  stages of the Tour de l'Ardeche and a silver medal in the road race at the 2010 Commonwealth Games in Delhi. She stayed with the team throughout 2011.

The following year, she competed for AA Drink–Leontine. That season, she won the silver medal in the road race at the Olympics, becoming the first Briton to win a medal at the 2012 Games.

Since 2019, she has rides for Trek-Segafredo.

At the postponed 2020 Tokyo Olympics, she was chosen to be part of the UK's cycling squad where she finished 11th in the race. The race was won by  Anna Kiesenhofer of Austria.