Li Jiajun is a Chinese professional short-track speed skater turned coach. He has been a 2X Overall World Champion in 1999 and 2001 as well as is the recipient of five Olympic medals- 2X silver and 3X bronze.

Changchun, Jilin native, Li Jiajun was born on 15th October 1975, under the star sign Libra. The forty-five years holds a Chinese nationality and is of South Asian ethnic background.

As of 2021, Li Jiajun has an estimated net worth of $1 million. Throughout his short-track speed skating career, he has won several medals which has a tremendous monetary value. China rewards their Olympians $37,500 for each gold medal they win, $22,500 for each silver, and $15,000 for each bronze. In team sports, each team member splits the pot evenly.

Apart from the Olympics, he has brought gold medals competing in other events such as World Championships, World Team Championships, and Asian Winter Games. These events also pay their gold medalist a good deal of money. Besides, there were also sponsorship and endorsements.

Reportedly, Li is working as the assistant coach for the national team.

There is less to no information about Li Jiajun's personal life in the media. As a matter of fact, he has maintained a distance from the media since he retired. Repordaley, he went to study in Canada later that year.

In the 1998 Nagano Olympic, Li led for much of the way during the final race of the 1000m, however, was edged out at the finish-line by Kim Dong-Sung, to win a silver medal. In the 5000m relays, he won a bronze medal.

In the 2002 Winter Olympics at Salt Lake City, he successfully reached the finals of the 1000 meter but failed to win gold after being disqualified following a collision with Apolo Ohno, which made Ahn Hyun-Soo and Mathieu Turcotte also drop and allowed Australian Steven Bradbury to have the gold medal. Li Jiajun won silver. Further, he had bronze for 5000 relays. 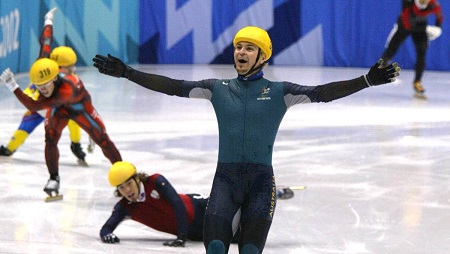 On August 18, 2006, he retired from short-track speedskating. The following year, during the opening ceremony of the Asian Winter Games, Li was given the honor to light the torch.