A Basketball player turned coach, Levell Sander is the interim head coach for the Binghamton Bearcats men's basketball team for the 2021–22 season, replacing Tommy Dempsey. Earlier, he served as an assistant for Pardubice and Czech Republic U18. He has authored the book "A Guide to Playing Professional Basketball Overseas".

As of 2020, Levell Sanders has an estimated net worth of $1 million. His income source is widely considered his basketball career: initially player and then coach. Sanders spent 16 years long playing in the Czech basketball league. During his peak career, he earned $100,000 per annum as a salary.

Upon retirement as a player in 2014, he pursued a career as a coach with Pardubice as an assistant and then head coach. Further, he served for Czech Republic U-18 before joining Binghamton. As an assistant, he earned $100,500 annually. Recently, Binghamton University introduced Levell Sanders as its new interim men's basketball coach. Though his salary at the college is undisclosed, his salary is approximately $200,000.

Additionally, he has a sports line called Euro Game Gear.

Levell Sanders started his coaching career in 2014, serving as an assistant at BK Pardubice. Later two years, he was promoted to head coach for the team. In 2017, he was named Eurobasket.com All-Czech Republic League Coach of the Year.

Further, he also coached the Czech Republic U18 National Team at the 2017 European Championships (Division B) in Estonia. 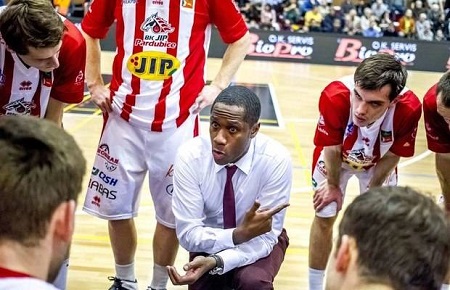 Levell Sanders is married to his wife Pamela for a long time now and shares a daughter, Olivia. The Sanders family resides in Binghamton. He met Pamela in the Czech Republic and call the place his second home. Usually, Levell does not speak much about his personal life but when the interviewee pops a question, he makes sure he feed his/her quires.

Sanders is active on Instagram with stays updated with his fans but does not share family photos. Similarly, Pamela stays out of the spotlight like other wags.