A native of Guayaquil, Ecuador, Leonardo Campana is a professional footballer who plays for Inter Miami on loan from Wolverhampton Wanderers. He came to the team on loan on January 20, 2022. Since then, he has been playing for them and is doing good in his career.

Apart from being a prominent player in his club, Campana is also a prominent national footballer who has already represented the youth national team of Ecuador. Not only that, but he has played for the senior team and helped them to win some games too. While playing for the U20 team, he played an essential role in helping the team take the title of South American U-20 Championship Champion in 2019.

Campana's Contract With His Team – Salary & Net Worth

Currently, Campana plays for Inter Milan, and Spotrac reports his base salary is $84,000. From this, it becomes clear that Campana takes home a decent profit from his profession. He is playing on loan, but at the time of this post, Campana is originally signed with Wolverhampton Wanderers. Transfermrkt reports that Campana's market value is €2.00m which will surely increase in no time in the future as the footballer is still active in this sport. Like many other footballers, Campana also makes money from sponsorship and endorsement deals.

His Instagram bio shows that Campana is associated with Nike, and by promoting the brand, he may be receiving a considerable profit.

As of now, Campana is leading a single life and is focused on his career rather than searching for a life partner. None of his recent social media posts hints at Leonardo dating a girlfriend. Furthermore, the footballer is known to keep his personal matter away from the public eye rather than exposing them to the media.

But it seems like Campana had an affair in the past, as some sources claim that he was dating Luciana Guschmer Coka. It is reported that they shared some snaps on social media, which created confusion among people about their relationship.

But now, he is single and is not dating anyone. However, Campana may share some updates about his life in the future via his Instagram, where he is available as @leonardocampana.

Campana's football career began when he joined Barcelona SC in 2016. After appearing in some games, Campana moved to English Premier League club Wolverhampton Wanderers on January 21, 2020. Likewise, he was loaned to Primeira Liga side, Famalicao. 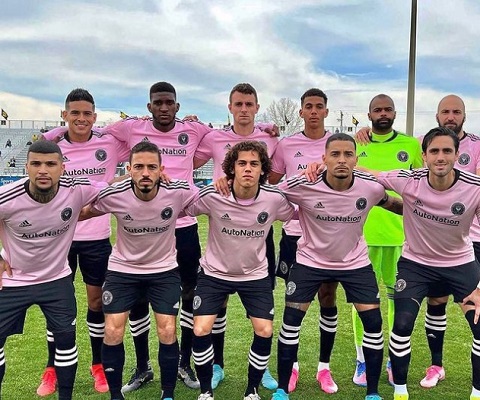 For them, he made nine-game appearances and also scored two goals. In 2021, he played on loan with Swiss Super League side Grasshopper in 14 matches, scoring three goals. On January 20, 2022, Campana came to the Major League Soccer club Inter Miami.

Talking about his international career, Campana has already made his debut for the senior team of Ecuador and is also on the list that is playing in the FIFA World Cup 2022.

Leonardo Campana Romero was born to his parents, Pablo Campana and Isabel Romero, on July 24, 2000, in Guayaquil, Ecuador. His father, Pablo, is an entrepreneur and former Minister of Commerce. Also, he is a retired male tennis player from Ecuador.