Leona Maguire is a rising Irish professional golf player. Turned professional in 2018, she plays in the Ladies European Tour and LPGA Tour. Maguire has already won two Symetra Tour. Leona played on the amateur level for more than a decade before turning professional. Maguire holds the record for holding the 1st rank in the World Amateur Golf Ranking for 135 weeks.

Leona Maguire was born on November 30, 1994, in Cavan, Ireland. She is among the two children born to Declan Maguire and his wife, Breda Maguire. Leone has a twin sister, Lisa Maguire, who is also a professional golf player. Both of her parents are school teachers. Leone stands five feet and six inches tall and weighs 56 kgs.

Leona Maguire has an estimated net worth of more than $200,000. She credits most of her net worth to her successful career in golf. Also, she makes a reasonable sum from her sponsorship deal with Puma, Ping, Allianz, and KMPG. 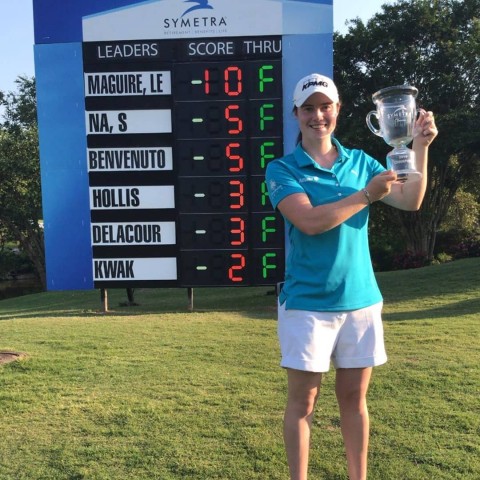 In early 2021, the Irish golf player has earned $25,000 from Gainbridege LPGA and $47,000 from LPGA Drive on Championship, where Albane Valenzuela finished top-5 in the same series. Totaling her making from LPGA Tours, it sums to $281,856. Maguire has earned $120,000 from her successful career at the Symetra Tour.

Who is Leona Maguire Dating? Know About Her Relationship Status and Boyfriend

Cavan Native Leona is an active social media user. Following her posts, We can be sure that she is living a single happy life as of 2022. She is yet to find the love of her life. Maguire is very much concerned about her career rather than her personal life.

Maguire is very much close to her family. She spends most of her free time with her family. The golf player likes to visit new places and keeps traveling around the globe.

Leona started her amateur career on 17 March 2005 in competition at Castle Hume golf course. In 2007, Maguire became the youngest winner of the Hermitage Ladies Scratch Cup at the age of 12. In 2009, The golf player won the French International Lady Juniors U21 Amateur and the Irish Ladies Golf Union Order of Merit award.

In the early 2015 season, Maguire reached No. 1 in the World Amateur Golf Ranking. By the end of her amateur career in 2018, Leona had won more than ten Amateur tours. Maguire made her professional debut on the LPGA Tour. In 2019, Leona won her first professional tournament at the Windsor Golf Classic. She has ranked 100 on the LPGA Priority List for the 2020 season ahead of second-place Inbee Park.