Laz Diaz is an American professional umpire in Major League Baseball who has been working in MLB since 1999. He wears a number 63 jersey referring to his birth year of 1963. In March 2010, Laz was inducted into the Cuban Hall of Fame for his contribution to MLB.

Is Laz Diaz from Cuba?

Laz Diaz was born on March 29, 1963, in Miami, Florida, the United States, and his birth sign is Aries. He is American by nationality and his ethnicity is Black.

Laz's family background is from Cuba who immigrated to the US in the 90s. At that time, there was a political revolution in Cuba. So Laz's father Lazzaro and his mother fled the country. 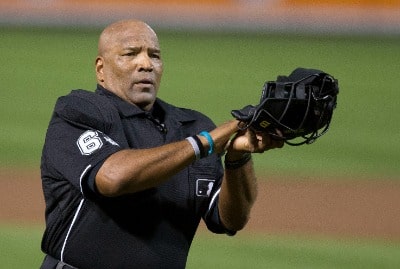 The American umpire attended Harry Wendelstedt Umpire School in 1991 where he learned to be the umpire. Finally, in 1995, Laz made his professional umpire debut in the International League. Later, in 1999, he signed for the MLB and has been there up to the date. He was one of the 22 umpires who were promoted to the MLB in 1999.

Laz also served in the Marine Corps Reserves before his umpiring career.

Net worth and Earnings of MLB umpire Laz Diaz

According to sources, American MLB umpires are paid well. An average salary of an MLB umpire is around $200,000. The long-time MLB umpire Laz Diaz's salary is estimated to be $250,000 to $350,000 approximately.

So, The American MLB umpire has an estimated net worth of $1 million approximately. Laz is not an average umpire. He has a huge experience and is often involved in controversies which may also have helped in his brand name. So it is sure that he earns significantly more than the average umpire.

Diaz has also been featured in Pepsi commercials along with Detroit Tigers' Johnny Damon, the Minnesota Twins' Joe Mauer, and broadcaster Gary Thorne.

Read also: How Much Is Austin Davis's Net Worth? Salary & Contract

How much is the salary of the MLB umpire?

MLB also covers the extra expenses of their umpires. They get $340 per diem to cover hotel and food. These umpires also get a full-paid vacation of four weeks.

Is Laz Diaz the worst umpire?

Though Diaz has umpired for more than 20 years, the MLB umpire has always been controversial. umpscorecards.com ranked him in the bottom 7% in accuracy and bottom 12% inconsistency this season. 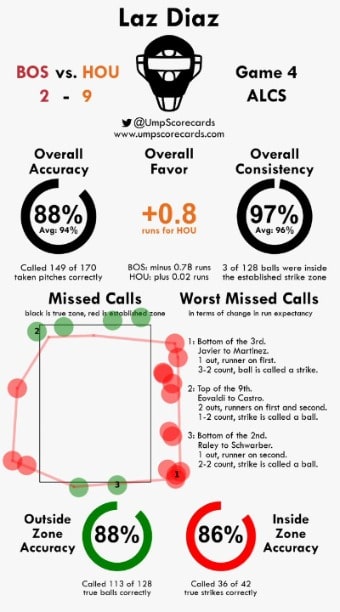 One of his major umpiring mistakes was in the game between the Red Sox and the Astros.

According to ESPN's Jeff Passan, he missed 21 calls in that single game with 11 coming from Houston’s and 12 in the balls thrown by Red Sox pitchers. 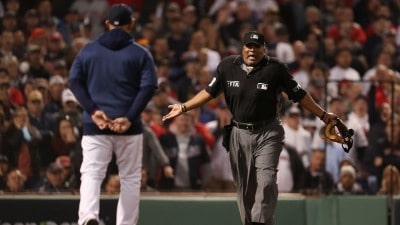 Laz Diaz controversy in the game between Red Sox and As SOURCE: https://nesn.com/

Though controversial, the arguably worst MLB umpire has umpired some historical games like in 2009, Díaz was the third-base umpire for Mark Buehrle's perfect game.

Laz Diaz has never opened about his married life or any family details in the public. But it looks like he is a married man with children. But he likes to keep his love life behind the camera.

He has never appeared together with any other woman in the public. At the age of 58, there can be chances that he retire soon and live his remaining time with his loving partner.