Larry Gene Nelson is an American Professional golfer who was introduced to the game of Golf by Ken Hummel. Nelson took up golf at the age of 21, after serving in the infantry in Vietnam. He attended Kennesaw Junior college (later Kennesaw State University) for his collegiate year and turned professional in 1971, a year after finishing college.

Nelson was born on 10 September 1947 under the star sign Virgo. He was born in Alabama, the United States He resides in Marietta, Georgia. He was born to parents Rudell Fant and Vernon Earl Nelson. Though not playing the game as a child, atypical in case of a successful professional golfer. However, he developed a knack for the game and hasn't stopped till now.

Nelson worked as an assistant for Bret Seagraves in 1970 who suggested he pick up a copy of Ben Hogan's five-lesson: The Modern Fundamentals of Golf. After studying golf, he started playing golf and became a legend in the golfing industry and has accumulated big rewards from his career. His estimated net worth is $10 million.

The 5' 9'' tall has earned $3,827,401 from his PGA Tours according to the reports from PGA tours. He is ranked in the 373 positions in the PGA tours. The highest-earning players in the PGA tours are Tiger Woods, Phil Mickelson, and Jim Furyk who are ranked first, second and third.

As a Professional golfer, he would have definitely received sponsorship and endorsement deals. However, his biggest endorsement contract is $6,000 playing for Ben Hogan Golf Equipment clubs.

The 68 Kg Nelson married his childhood crush at the age of 20 before going to serve the country. Larry is married to Gayle Nelson.

He often wrote letters to his wife whom he met when he was just 5-year-old on the top of C-rations boxes, keeping her informed about his daily routine and not giving too many details as not to worry her. In return, she would send Kool-Aid packages to cut the bitter taste of his quinine water. 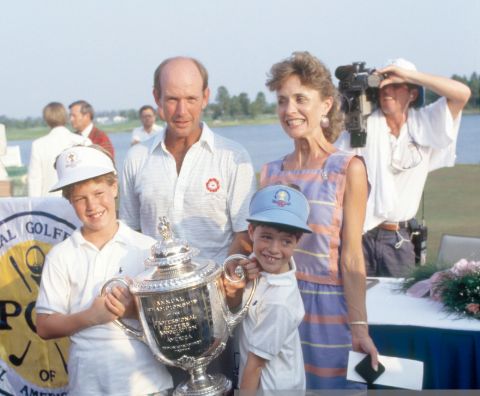 Larry Nelson with his wife and children SOURCE: Getty Image

The couple were married in 1967 and have been together since without any controversies or affairs. They are happy in their marriage life are parents to two sons: Drew Nelson and Josh Nelson.

Golfing as a "Career" seemed Far-fetched for Larry Nelson

The 5' 9'' tall Larry was an assistant for Bret Seagraves in 1970 and practiced golf in the dawn or afternoon before the members arrived. He would hit the ball in the ditch using one arm.

After working for a few years with Bret, He was thinking of taking another job since he wasn't able to support his family with the income that he was earning. However, to his surprise, a group of five Pinetree members including Chet Austin, a golfer, pooled together enough money ($10,000) to sent him to play mini-tours.

Initially, Larry was hesitant to play golf and earn money since he saw other professional members come out of Pinetree defeated now and then. After talking to Bret his senior, He told Nelson "You've got this because if you don't, you'll always regret it."

During his starting career in the year 1972, he committed much violation because he didn't know the game. After knowing the rules and regulations, he became one of the two to ever qualify for he PGA Tour after picking up golf in their 20's.

Larry was the A-team infantry squad leader in Vietnam and was responsible for nine men during the nightly jungle ambushes. Their primary mission was to draw fire and they call in the infantry. He was an infantryman. 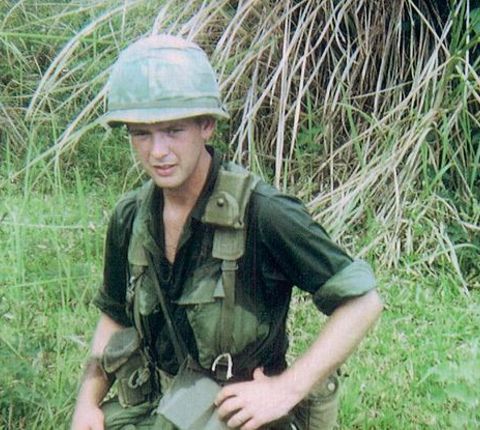 During his leadership, he used to avoid trails and rice paddy dikes when often made his men's angered. They would dig foxholes an hour before sunset and settle down once darkness set in. One night, when his troop burrowed down yards off a trail, an entire company marched right passed them. After figuring what was happening, he controlled his own breathing but was terrified that his own squad member would startle awake and give away their position.

However, in the entire time that he served for his country, he never lost a man which is a remarkable fear achieved by Larry.