An American college basketball player Lamar Stevens currently plays for the Penn State Nittany Lions of the Big Ten Conference. Earlier, he played for the Haverford School and is a three-time PIAA AAAA All-State (2014, 2015, 2016). He was twice included in the First-team All-Big Ten in 2019 and 2020.

Lamar Stevens finished his senior college career in 2020 and has decided to enter into the NBA Draft 2020. As per the mock draft, he is projected to be picked in the mid-second round. If he makes it to the NBA, he will probably get a contract with a minimum salary and will earn about $560,000 annually.

Previously, he played for Penn State as a college player. NCAA doesn't allow college players to take a salary instead they will get all the facilities from college. Lamar didn't get a salary but was provided scholarships and also got the facilities like accomodating, fooding, and all the other additional needs.

The 23-year-old former Penn Stats power forward has jus ended his college career. He is unmarried as of July 2020 but could have a girlfriend in his college. Lamar has not talked about his relationship status and girlfriend but could have a secret affair with his girl. He will definitely reveal his life partner after he develops his career.

Lamar was born as Lamar Brandon Stevens on July 9, 1997. He was born in Philadelphia, Pennsylvania, to American Lou and Kim Stevens and holds an American nationality. He also has a younger sibling sister named Keira. 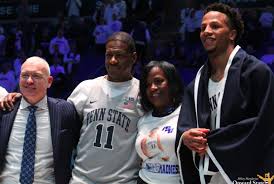 Stevens played sophomore and junior seasons of high school at Haverford School in Haverford Township, Pennsylvania. He led Haverford to two straight state championship runs and was included in the All-State and All-District teams both years. He then transferred to Roman Catholic High School in Philadelphia. He was again named to the All-State and -District teams as well as All-Philadelphia.

After his high school, he committed to play with Penn State Nittany Lions and started in all 33 games during his freshman year. In his sophomore, he was honored with the Most Outstanding Player of the NIT and was also named to the First-team All-Big Ten. After his junior season, he declared for the NBA Draft but later returned to Penn State to complete his senior season. He was again named to the First-team All-Big Ten in 2020 in his senior year.