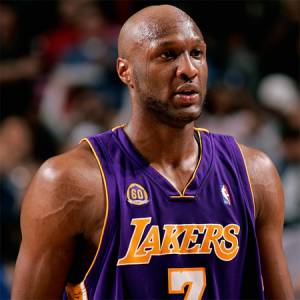 Lamar Joseph Odom is an American former professional basketball player who began his career with Los Angeles Clippers and ended with Laboral Kutxa Baskonia in the year 2014. He is the two times NBA championships for 2009 and 2010 respectively, as a member of the Los Angeles Lakers in the NBA.

The retired NBA player Lamar Odom has an estimated net worth of $30 million. Prior to this, in 2014, his net worth was around $43 million but his divorce with his beautiful spouse Kardashian, retirement from the NBA, as well as drug and life-threatening health issues, took his wealth downhill.

Apart from his professional career, he has added a huge amount to his bank account through endorsement and TV series: “Keeping up with the Kardashians” and “Kourtney and Khole Take Miami”.

Lamar Odom Personal Life; Who is his Wife?

Lamar Odom tied the knot with his high school sweetheart Liza Morales. The couple shared three children named Destiny, Lamar Jr, and Jayden who died of sudden infant death syndrome at the age of 6 and half month. The couple divorced in the year 2007.

Later, Odom was spotted with Khloe Kardashian. They dated for few months and then decided to take their relationship to next level and exchanged vows on 27th September 2009. Their wedding was featured on the E! Reality based TV series “Keeping Up with the Kardashians”.

After spending almost four years together, on 13th December 2013, Kardashian filed for divorce and the restoration of her surname. However, Kardashian stopped the progress of the divorce because Lamar Odom was found unconscious in a whorehouse named “Love Ranch”, in Crystal, Nevada and was taken to a hospital. As an estranged wife, Kardashian stayed with Odom until he fully recovered.

On 30th August 2013, Lamar Odom was arrested for accuse of Driving under the influence of alcohol. Then he was given a sentence of 3 years probation as well as alcohol abuse treatment.

Apart from DUI, there were also rumors of drug abuse, but he intensely denied them.

Lamar Odom was born on 6th of November 1979, in South Jamaica, Queens, New York City. His father Joe Odom was a heroin addict. At the early age of 12, Odom lost his mother, Cathy Mercer due to colon cancer. Then he was raised by his maternal grandmother, Mildred Mercer.

He enrolled at the Catholic high school, Christ The King Regional High School located in Middle Village, Queens. However, due to his poor grade, he dropped the school at the beginning of the senior years. He then joined Redemption Christian Academy and afterward to the now-defunct St, Thomas Aquinas High School in New Britain, Connecticut.

As a senior, Odom was coached by Jerry DeGregoria and initially was recognized nationally as the "Parade Player of the year" in 1997.

Odom was transferred to the University of Rhode Island as a non-matriculating student where he was forced to sit out the 1997-98 seasons. Throughout his college career, he played earning all-conference honors in his only season in the Atlantic 10 Conference.

In 1999, he was drafted in the first round with the 4th overall pick by the Los Angeles Clippers. Throughout his 4 years spell with the team, Odom violated the league’s drug policy in his 4 seasons. Nevertheless, he was named to the NBA-All-Rookie Team.

Odom played 2003-04 season for Miami Heat and was traded to the Lakers. He spent 7 seasons with the Lakers and then moved to the Dallas Mavericks in the year 2011.

In the year 2012, Odom was traded back to Los Angeles Clippers. He then played momentarily for Laboral Kutxa Baskonia 2014.

The star basketball player, Odom played for his country in the 2004 Olympics, winning a bronze medal. In 2010, he played in the FIBA World Championship.