Kyle Hardy Wright a.k.a. Kyle Wright is an American professional baseball pitcher who is signed to the Atlanta Braves of Major League Baseball (MLB). He finished his collegiate career playing for the Vanderbilt University and was picked by the Braves in the 2017 MLB Draft.

Huntsville, Alabama native, Kyle Wright was born on 2nd October 1995, under the star sign Libra. The twenty-four years old is an American by nationality who comes from a white ethnic background. Regarding his physique, he stands 1.93 m tall and weighs 220 lb.

Wright is dating his high school sweetheart, Shelby Balentine. The couple was pair for the prom at high school. Wright has been sharing pictures with Shelby's since 2014. 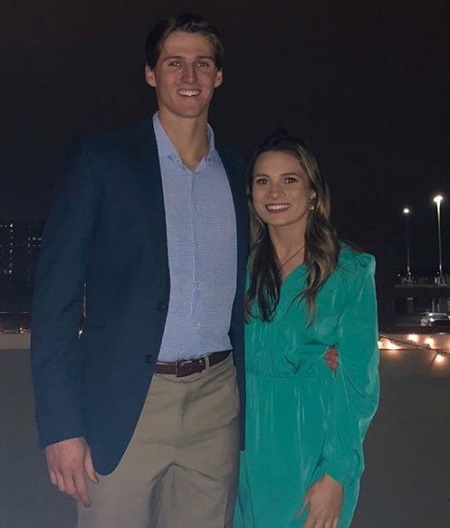 A good boyfriend, Wright never fails to wish her bae birthday or anniversary. His most recent pictures on IG is of the duo, Wright wishing her birthday, "Happy birthday to my wonderful girlfriend! I’m sorry that I don’t get to see you today but I still hope you have the best day! Just need a little work on that golf swing  happy birthday Shelby."

Kyle Wright is the son of Roger and Belinda Wright. He was raised alongside his elder brother, Mitchell, and younger brother Trey.

Kyle enrolled at the Buckhorn High School in New Market, Alabama where he went 6–2 with a 0.88 earned run average (ERA) and 75 strikeouts as a junior. Upon graduation, he joined Vanderbilt University as per his commitment to play college baseball. As a junior in 2017, Wright went 5–6 with a 3.40 ERA and 121 strikeouts.

At the 2017 MLB Draft, the Atlanta Braves selected Wright with the fifth overall selection. Later, he was signed to the minor league team.

On 1st September 2018, he was called up to the major leagues for the first time, becoming the first player from the 2017 draft class to make it to the majors. On September 4, he made his major league debut against the Boston Red Sox. At the start of the 2019 season, he made the Braves' starting rotation.