Kyle Whittingham is American professional football turned coach. Currently, he stands as the head coach at the University of Utah. During his playing stint, he played for BYU (1978-1981), Denver Gold (1983), New Orleans Breakers (1984), and Los Angeles Rams (1987) as a linebacker.

San Luis Obispo, California native, Kyle Whittingham was born on 21st November 1959, under the star sign Libra. He holds an American nationality and is of white ethnic background.

How Much Is Kyle Whittingham's Net Worth In 2022?

The significant source of Kyle Whittingham's earnings is his coaching career. It's been over three decades that Whittingham is in the coaching field.

Kyle Whittingham is married to Jamie Daniels. The couple tied the knot in 1983. The couple shares four children together.

As a Matter of fact, Daniels' wife lets her husband enjoys all the spotlight. She is shy coming to public. To date, there is no information about the conflict and extramarital affair in their marriage. They really are living blissful life.

Whittingham is a Christian and is a member of The Church of Jesus Christ of Latter-day Saints.

Kyle Whittingham was born to Nancy Livingston Whittingham and Fred Whittingham. His father is a former football player who played linebacker professionally for nine years. Then he coached at the college and the pro level for almost twenty years.

In 1982, he graduated from BYU with a bachelor's degree in educational psychology. Further, he has a master's degree in professional leadership.

Kyle Whittingham began his coaching career in 1985 as a graduate assistant for BYU.
In 1987, he was appointed the defensive coordinator by Eastern Utah.

The following season, Whittingham joined Idaho State. After serving five seasons with Idaho State, he was hired by the Utah staff as defensive line coach, working alongside his father, Fred Whittingham. 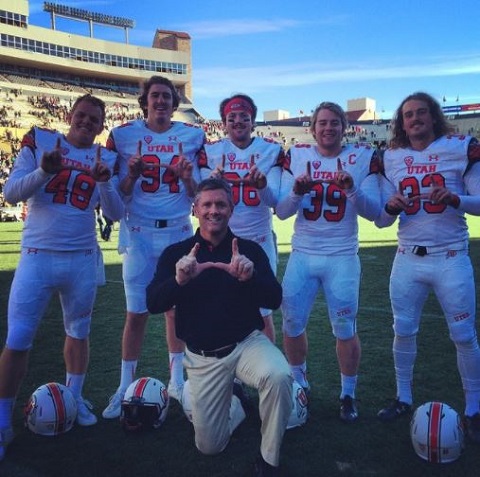