Kyle Long is a recently retired American football player. Kyle played in the National Football League as a football guard. He started his career playing for the University team and then made his professional debut in NFL.

Kyle was born to an athlete's family and continued the same passion for American football. He has started working with CBS Sports Network for Sunday Morning's Pregame Show. Talking about his physical appearance, Kyle stands six feet and six inches tall and weighs 151 kgs (332 lbs).

Kyle started his professional career as a football player in 2013. Before that, Kyle played both baseball and football during his High School. Upon completing High School, Kyle was selected for the 2008 U.S Army All-American Bowl. Chicago White Sox drafted him for the game, but he remained with Florida State University. 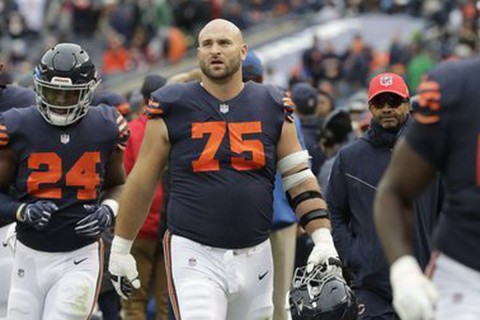 In 2010, Long had to change the University following some personal setbacks. He moved to Saddleback College in California. Long played for the college team and grew up his day after day. The Chicago Bears selected long with the 20th overall pick in the 2013 NFL Draft. He could not be part of his teams in the first few games due to some league rules.

Long made his debut against Cincinnati Bengals at right guard. The following year, He made it to Pro Football Focus All-Rookie Team. Kyle got a chance to play in the Pro Bown 2014 after left guard Mike Lupati had an injury. 2015 proved to be his highlighting year. Kyle started with all games of the 2015 season and bagged a spot in Pro Bowl.

In 2016, Kyle signed a $40 Million contract for four-years with Chicago Bears. However, This rising star had a bad season in 2016 after sustaining multiple injuries. Kyle could not make it to his top in the following years, announcing his retirement in January 2020. He canceled the contract, and his team announced him as a free agent.

What is Kyle Long's Net Worth?

Kyle Long has an estimated net worth of $25 Million. He credits most of his net worth to his successful career of playing in the NFL. He remained with the same club, Chicago Bears, for his short career of seven years. He eventually retired after having too many injuries. Khalil Mack is a rising NFL defensive player who is the highest-paid defensive player in NFL history.

Kyle signed a $40 million contract with Chicago Bears but had to cancel before its end in 2020. He earned $12 Million as his salary and his signing bonus in 2013 after his initial draft with the Bears. Patrick Mahomes II is the highest-paid quarterback in NFL history.

Talking about Kyle's relationship status, there are no exact sources to claim that he is in any formal relationship. He seems to be living a single happy life along with his family. However, he was rumored to be dating his girlfriend back in July 2017. A source claimed that he shared a photo dressed in a blue suit and orange tie with a girl at his east Lake Forest home. He captioned the photo writing, "Got tired of eating by myself." He has already removed the photo now and the couple might have been separated. 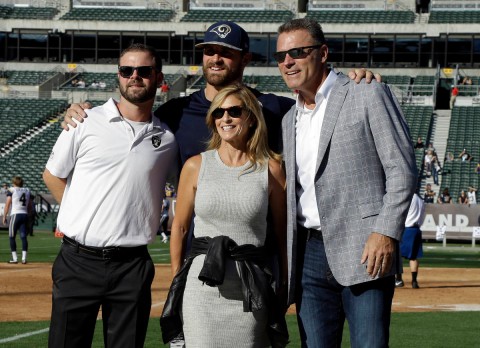 Kyle along with his brother and his parents SOURCE: Review journal

Kyle Long was born as Kyle Howard Long on December 5, 1988, in Ivy, Virginia. He is among the three children born to Howie Long and his wife, Diane Addonizio. He has two brothers, Chris and Howie Jr. His father is also a former American football defensive end, actor, and sports analyst.