Kurtis Mogg is a Professional football player from Newzealand who plays in the position of defender for Wellington Phoneix. The England-born defender joined Wellington at the age of 16 where he features Phoenix five times. He joined Wellington phoenix for a one-year scholarship contract. Mogg gave up his country and his loved ones to accomplish his dreams of becoming the best footballer.

The Phoenix Center-back Mogg is an England-born but New Zealand by nationality born on 9 May 2001. He wears jersey number 31 for the Wellington Phoenix. Mogg as a Pheomix player played his debut game against A-league Men side Western United FC on 7 December 2021. As of 2022, he is just 20 years and his zodiac sign is Taurus.

Kurtis's family information is still confidential to date. He loves to it keep private. However, he posts his family quality time photos via Instagram but still, he hasn't mentioned anything about them. But about his sibling brother (elder), he is very open about it. His brother's name is Joe Mogg who also handles all his football-related activities. 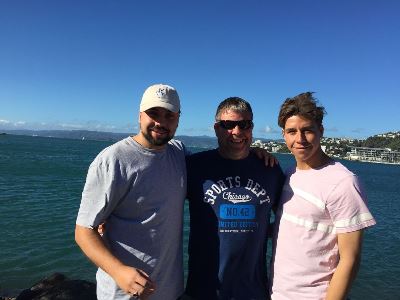 Kurtis with his brother Joe and his fatherSOURCE: Instagram

Kurtis was actually born in Worcester England but later immigrated to Newzealand. He started his football career at the Coast in the 9th grade in 2010 where he impressed everyone with his defending ability.

Later on, he was called for A team for the National Tournament the next year. After playing for Green for straight 2 years, he was invited to Phoneix Academy.

How tall is Kurtis Mogg?

England-born Newzealand nationality has an athletic body type with a fair skin tone. He stands tall at a good height of 181 cm (5 ft 11 in) and possesses a weight of around 69 kg.

Kurtis Mogg started his professional football career in 2010 when he was about 9 years old. The phoenix jersey number 31 played his very first professional for Hibiscus Coast when he was in the 9th grade in  Newzealand. He played with the top team during his youth career. He was linked with Hibiscus coast for 8 years where he played his whole youth and a year of his senior football career. His hard work and dedication took him forward even more. So at the age of 14, he was headed to the Men's  First and Reserves pre-season training. As soon as he was 15, he was in the Men's first team where he played 46 games adding 1 goal to his tally. Mogg's skills and ability catch an eye of a coach so he was called up to join Phoenix Academy on Oct 22, 2021, until the end of June 2022.

One of his future goals is to play for the Nea Zealand national team as well. He is very much dedicated and focused on football at the moment.

Who is Kurtis Mogg Girlfriend? Is he single?

The Wellington Phoenix center-back Mogg being a private personality, he has kept his personal life very private. He has kept his life low-key due to which so any rumors or news about his relationship status is unknown to the public. We will update you on this when it's available.

Net worth, Salary, and Market Value

The New Zealand nationality is in the very beginning phase of his football career. He is very young and has time to build himself as a well-established player. Mogg joined Phoenix in a scholarship contract so he still has not adequately added income to his net worth.

The England-born defender has yet to go very long in his career. As of Nov 22, 2021, his market value is 200K Euros which is also his highest value to date. It will significantly increase in upcoming years if he consistently performs well.

Kurtis Mogg is quite active in social media. He shares his life events and sports-related information through his social media account. His Instagram id is @kurtis.mogg.