A native of Lyon, France, Kurt Zouma is a French professional soccer player who made his first professional debut for Saint-Etienne in 2011. He plays for West Ham United, wearing shirt no. 4 as a center-back. He started playing for France's national team in 2015 and has been capped 11 times with an international goal.

Zouma will earn more than $5 million annually in 2022. He is married to his wife Sandra and is raising three children.

The primary source of Zouma's earnings is football, as he has not revealed any endorsing deal with brands. Currently, his market value is $€35.00 million. However, a year ago, his market value was $20.48 million. So far, his total transfer procedure is $26.99 million.

As of 2022, he has an estimated net worth of around $5 million. He owns a house in Lyon, France, and lives with his spouse and children.

Who is Kurt Zouma's Wife?

Twenty-seven-year-old French footballer Kurt Zouma is a married man. He tied the knot with his longtime girlfriend, Sandra Zouma. Kurt and Sandra got married when Kurt was only 19 years old in 2012. 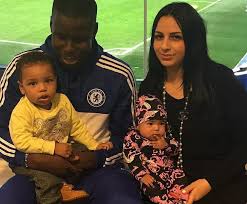 Kurt Zouma with his wife and two children SOURCE: Lifebogger

His wife, Sandra, is also originally from France and is two years older than him. They are blessed with three children: one daughter named Sihame and a baby boy but the details about their third child are unavailable.

In Feburary 2022, Kurt was seen slapping his pet's face: he was filmed booting his cat like a football across his kitchen floor. He was fined £250,000.

Kurt Zouma was born on 27th October 1994 in Lyon, France. His birth sign is Sagittarius. Regarding his nationality, he is French and belongs to the African ethnicity. His parents immigrated to France from the Central African Republic. He grew up alongside his older brother, Lionel, who now plays as a center-back for the Greek club Asteras Tripoli.

He started his football career at the early age of 9 with Vaulx-en-Velin, where he played as a right-winger and then as a striker before switching to his current position as a defender.

Zouma then switched to Saint-Etienne in 2009 and played for the club's youth team until 2011.

For the club's reserve team, he scored two goals in 10 appearances from 2011-13. Similarly, he played 51 games overall for the senior team and scored four goals.

On 31st January 2014, Kurt Zouma arrived in Chelsea, signing a 5 ½ year contract worth $16.06 million. He wears a no. 5 shirt which Michael Essien previously wore. He remained on loan for 2013-14 seasons at his former club, Saint-Etienne.

Zouma made his first appearance for Chelsea in a pre-season friendly against Wycombe Wanderers. On 27th July 2014, he scored the first goal for his native club against Slovene club Olimpija in a 2-1 friendly victory. On 24th September, he made his league debut, scoring the opener in a 2-1 win against Bolton Wanderers.

So far, he has scored a goal and made 47 overall appearances.

Zouma signed to West Ham United for £29.8 million, signing a four-year contract on 28th August 2021. He made his debut for the team on 16th September in the Europa League in a 2–0 win over Dinamo Zagreb. His first goal for the club came on 7th November in a 3–2 victory over Liverpool.

Kurt Zouma is a French youth international representing his country at the U-16 and U17 levels. As a U-17 team member, he played in the "2011 UEFA European U-17 Football Championship" and "the 2011 FIFA U-17 World Cup". He has also been the captain of the French U-21 national team.

In the 2013 World Cup in Turkey, he played a part of the U-20 squad and won the Cup. On 19th March 2015, he received his first call from the France national team for the friendlies against Denmark and Brazil. Ten days later, he made his first international appearance for the national team in a 2-0 victory at the Stade Geoffroy-Guichard.

In August 2017, Zouma played in a World Cup qualifier against the Netherlands along with Lucas Digne, Paul Pogba, and other French teammates. So far, he has earned two caps for his national team side.